Wallace in legal challenge to €2m orders against him 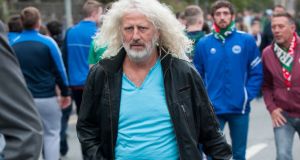 Independent TD Mick Wallace is resisting an “unfair and premature” application by US company Cerberus in the Commercial Court for €2 million summary judgment orders against him over his guarantee of loans to a company of his.

Mr Wallace guarranteed a €2.1 million loan to his company, M&J Walace, from Ulster Bank, secured against part of his Italian quarter development on Ormond Quay in Dublin.

Cerberus subsidiary, Promontoria Aran, claims that it is owed the money, as it bought the loan from the bank in 2014, and is bidding to enforce Mr Wallace’s €2 million guarrantee.

Mr Justice Brian McGovern heard arguments from both sides on Tuesday before reserving judgment. He said he hoped to rule on the matter in the next few days. Mr Wallace was in court for the hearing.

Opposing summary judgment, Mr Wallace argued Promontoria Aran was not validly assigned the €2.1 million loan to M& J Wallace, made to that company in 2009 by Ulster Bank, and was therefore not entitled to seek judgment against him over his guarantee of that loan, which was limited to €2 million.

He also argued the judgment application was premature and Cerberus should await the outcome of the receivership of M & J Wallace.

Promontoria appointed a receiver to the Wallace company late last year over its failure to repay a demand for €2.2m, comprising the full loan and interest. Because of the improving property market, the proceeds of the receivership should reduce his debt, Mr Wallace contended.

In the circumstances, the legal case was a waste of time and resources. His counsel Stephen Walsh BL argued Mr Wallace is entitled to a full plenary hearing on those matters and the fund should be refused summary judgment.

Paul Gardiner SC, for Promontoria, argued none of the matters advanced by Mr Wallace amounted to a defence to the entry of judgment and the court should grant the €2m judgment as sought.

Only after entry of judgment should the court address issues as to its execution or whether to grant a stay on the judgment order, counsel argued.

There was an “unequivocal statement” by Ulster Bank of February 27th 2015 it had assigned its rights in the 2009 facility to Promontoria, counsel submitted.

Mr Wallace had also made admissions about his failure to engage with the fund concerning the debt, counsel said.

Mr Wallace had admitted his company was given the €2.1 million and that he had executed the relevant guarantee, counsel said. There was no dispute a demand was issued by Promontoria and, when no repayment was made, a receiver was appointed to the company. The firm had not challenged the appointment of a receiver to it and nor had it disputed a notice of assignment of the debt.

Mr Wallace had opposed the application for entry of this case to the Commercial Court on the basis of an assertion he owes ACC €20 million and had no means to repay that, counsel said. That assertion supported the fund’s judgment application, counsel argument.

Mr Wallace had also said sale of a property in Dublin’s Italian quarter would reduce the debt to Ulster Bank but had not said it would “extinguish” his liability, counsel added.

While Mr Wallace said it was “unfair and oppressive” he should be subject to a €2m judgment application in all those circumstances, an assertion of inappropriateness of this application was not an assertion of a defence, counsel said. There was “nothing” to send to plenary hearing.

Mr Walsh, for Mr Wallace, said the “unfair” way in which the fund characterised Mr Wallace’s affidavits did not reflect the reality of what his client was contending. Mr Wallace had raised arguable issues concerning the assignment of the loans.

There was no evidence before the court to show the fund was authorised to accept the assignment of the Ulster Bank loan facility, he said. For an assignment to be valid, notice of the assignment must be given to the debtor.

That was not an “arid and technical” point but rather a strict statutory requirement. The required notice was not given and, as a result, Promontoria Aran has no legal entitlement to sue Mr Wallace, he argued.

Mr Wallace contends this application is premature on the basis the sale of the property is likely to reduce his liability under guarantee, counsel said.