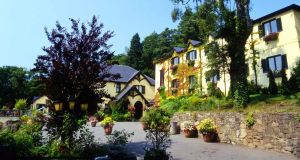 Aherlow House Hotel is nestled in the Galtee Mountains in Co Tipperary.

A Co Tipperary hotel that suddenly shut last week, leaving 43 couples due to have weddings in limbo, has been sold.

Couples had paid deposits ranging from €1,500 to €3,000 to hold their receptions in the hotel, but it closed without warning on February 9th.

Mr Shanagher has committed to honouring all weddings that were already booked and confirmed he will offer the couples “full credit against their future wedding cost in Aherlow House Hotel for any deposits they lost with the previous operator, Auburn Hotels (Aherlow) Limited”.

However, the hotel is not scheduled to reopen until March 3rd, after some refurbishments.Mr Shanagher said he would also contact the 47 former staff to offer them new employment.

“We appreciate that there has been a huge amount of uncertainty in the last week for everyone concerned and are confident this marks a new chapter for the hotel,” he said.

The sale price has not been disclosed but the property is thought to have been for sale for about €600,000.

A number of couples, who had paid up to €3,000 in a deposit, were due to have their weddings at the hotel during the time it is closed.

The new owner has asked couples and former employees to contact his team.

Mr Shanagher, who previously worked for the listed pub and hotel group Capital Bars and on the hospitality assets of Irish investment group Tetrarch, is expected to spend up to €500,000 refurbishing the hotel, work that will be carried out in a number of phases.

“We intend to invest heavily in the hotel so that it can provide the highest standard of hospitality to our guests and patrons,” he said.

The former hunting lodge sits on about 12 acres and has 29 bedrooms and 15 self-catering lodges. At peak, it hosted about 120 weddings a year.

The property was purchased by an entity called Norebo, a special purpose vehicle set up by Mr Shanagher with backing from private investors.

Couple Carol Smyth and Kieran McCormack, who live in Clonmel, had their wedding ceremony and reception booked to go ahead at the hotel on February 26th. Ms Smyth said they had paid €3,000 to the former operators of the hotel, which she had chosen for its “idyllic, remote setting”.

“We were absolutely devastated when I heard, I felt so powerless and completely in the dark,” she said. “I rang 17 hotels on one day trying to find one that could accommodate 180 guests with less than two weeks to the wedding.”

Ms Smyth said while she was happy for the staff the hotel would reopen next month, the news was bittersweet for the couple.

“We’ve managed to find a new hotel but the extra money we’ve had to pay keeps mounting up. We’re losing a lot of money and sleep, and absolutely exhausted. But we’ll get married, go on our honeymoon and get legal advice when we get back.”

A spokeswoman for Grant Thornton said the deposits are a contractual arrangement between the wedding parties and the representatives of Auburn Hotels Aherlow Ltd.

Auburn Hotel Aherlow has said previously it was up to the new owner to honour the deposits.

1 Solar panels: Are they worth the investment?
2 Eason has acquired rival Dubray Books for undisclosed sum
3 Bank leaked my loan request to family who tried to rip me off
4 When the Chemistry no longer works – the closing of a leading Irish ad agency
5 Longview seeks permission for 753 homes in Cork’s outskirts
6 Ryanair and Aer Lingus monitor impact of coronavirus on travel to Italy
7 Up to 5,000 engineering jobs expected to be created in 2020
8 Revolut valued at $5.5bn after latest fundraising
9 Stock markets have steadied after Monday’s dramatic falls
10 Bank’s planning of bonuses smacks of fantasy
Real news has value SUBSCRIBE