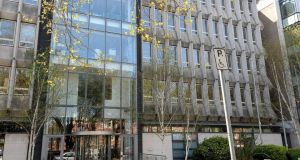 The six-storey block, over basement car-park, at 29-31 Adelaide Road, owned by property developer Sean Reilly and sold on the instructions of IBRC, is producing a rent of €2.9 million which will give the American investor a net yield of 6.3 per cent. Fergus O’Farrell of Savills advised the vendor.

The Adelaide Road complex was developed in the early 1970s as two separate office blocks and was held as an investment for many years by Friends First.

It later interlinked the two blocks by installing an atrium and upgrading all the office facilities before selling on the complex to Sean Reilly’s company McGarrell Reilly. The building was subsequently let to the Office of Public Works.

Lone Star’s acquisition of the Adelaide Road block comes three months after it acquired a loan portfolio also owned by Reilly for €220 million at a discount of 41 per cent to par.

The sale process was code-named “Holly” and related to loans with a face value of €373 million secured on 28 commercial properties primarily in Dublin 1, D2 and D4 and a number of development sites.

Its best assets were the 19,509sq m (210,000sq ft) Iveagh Court complex at the top of Harcourt Street, the Watermarque Building beside Shelbourne Park in Ringsend and City North, an office and hotel development on 100 acres on the Dublin/Meath border. The portfolio also included a number of sites in the greater Dublin area which are likely to be used for housing developments.

Lone Star’s decision to go off market to buy the Adelaide Road office building was probably triggered by the fact that the project Holly portfolio already included an adjoining block known as Marsh House at 25-28 Adelaide Road which is rented by a range of companies including insurance brokers Marsh Ireland.

There is intense competition for good office investments in the city because of the prospects of rental growth over the coming months.