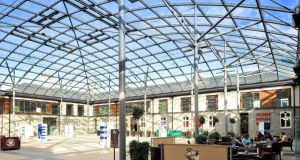 MacDonagh Junction, Kilkenny – around €17 million for a 50 per cent stake in the core arcade as well as full ownership of a number of other shops and offices on site 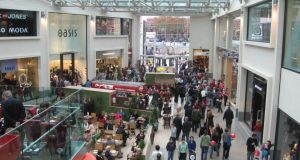 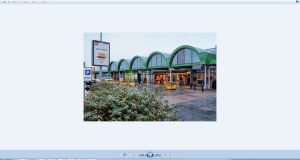 overseas funds who will view the dramatic fall in values as a good opportunity to invest on a grand scale in the improving provincial retail market.

John Moran of agents JLL is marketing the centres for Paul McCann and Stephen Tennant of Grant Thornton who were appointed receivers by AIB.

Given that the entire portfolio is currently producing a rent roll of €8.8 million, a selling price of even €115 million would provide a net return for a new owner of 7.34 per cent.

The sale comes at a time when business sentiment is gradually improving and agents are reporting renewed demand for shops in many provincial centres.

JLL’s head of research Hannah Dwyer says their Irish Property Index had shown that retail capital values had increased for the past six quarters, with a rise of 32 per cent since the trough.

“Despite these increases, they remain 58 per cent below the peak of the market, and are therefore at a turning point in the cycle.”

The Athlone centre accounts for over 60 per cent of the overall portfolio and though valued at over €300 million before the bust is expected to sell for somewhat above €61 million.

A further €13 million, or more, is likely to come from the mix of one-, two- and three-bedroom apartments beside the shopping centre which are currently producing a rental income of €1.3 million.

The Athlone centre has a net rent roll of €4,866,746 which is due to rise later this year when TK Maxx moves in and is followed by a number of other traders.

Easons is to avail of the changes taking place to consolidate its position in the complex. TK Maxx will be paying a basic rent of €200,000 in addition to 5 per cent of its turnover. The centre is anchored by Marks & Spencer who trade alongside H&M, Zara, River Island, Next, Topshop and Tommy Hilfiger.

The Athlone centre opened in 2007 and was due to have been sold to investors just before the crash. It has 66 individual shops with a floor area of 1,950 sq m (210,000 sq ft). There are also a number of external shops and offices.

JLL is understood to have put a value of around €17 million on a 50 per cent stake in the core arcade at McDonagh Junction as well as full ownership of a number of other shops and offices on site. Davy is the joint owner. It opened for business just before the 2007 crash and is currently producing an overall rent roll of in excess of €3.1 million, of which €1,250,000 will go to the new joint owner. The centre has 45 shop extending to 1,950 sq m (210,000 sq ft). It is anchored by Dunnes Stores who own their own premises. A strong fashion line-up includes TK Maxx, River Island, Next and H&M.

Two of the other shopping centres, Gorey, Co Wexford and Tipp Town, Co Tipperary, are also anchored by Dunnes Stores.

In Galway, the Westside shopping also has Dunnes as the main attraction as well as a McDonalds and a Maxol petrol service station. JLL has put a value of €7.65 million on the centre which is producing a rent of €784,000.

The only part of the portfolio in the Dublin area is the Orwell shopping centre in Templeogue, south Dublin which is producing a rental income of €540,000. The Supervalu is operated by the Horkan family who also rent two other shops and account for €320,000 of the income. The 10 shops have an overall floor area of 2,230 sq m (24,000 sq ft). The complex is fully let and the average weighted lease period to run is 12.6 years. Orwell is valued at around €6.5 million.