Bewley’s originally owned the famous building, but sold it in the 1980s 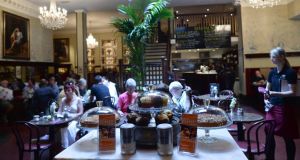 A general view of the inside of Bewley’s Cafe on busy Grafton Street in Dublin. Photograph: Artur Widak/PA Wire

As the property bubble reached its height in January 2007, the rent on Bewley’s landmark cafe on Dublin’s Grafton Street was set at €1.464 million when it came up for its five-yearly review. At that stage neither Bewley’s nor its landlord, Ickendel, a company controlled by property developer, Johnny Ronan, seemed to disagree about the figure.

Less than two years earlier, when the cafe closed for a period, clothing chain Zara had offered €2 million a year for the property.

Ickendel subsequently offered Bewley’s €6 million to vacate the premises, but it turned the offer down. If anything, values had gone up since then.

The review was rooted in a lease drawn up 20 years earlier, shortly after Campbell Catering took over the struggling cafe chain.

Following the purchase, the coffee shop’s new owner sold the Grafton Street building, which Bewley’s owned, to insurance company Royal Liver, and leased it back, a move designed to generate cash for the business.

That lease included what was thought to be a standard clause that would prevent the rent being reduced when it was reviewed every five years. This was the case until Bewley’s challenged it in the High Court when it next came up for review in 2012.

As a result, in March last year, the High Court ruled that the clause actually meant the rent could be reduced to the prevailing market rate.

By January 2012, this was considerably lower than what Grafton Street landlords could charge in 2007.

Following the case, the matter went to arbitration and it was cut to €728,000.

The Supreme Court ruling means that it is going back up to €1.464 million, the amount the business was paying at the time of its last rent review in 2012.

By then, some of the personalities involved had changed. Ickendel rather than an insurance company was its landlord.

That company was a client of State assets agency Nama, which had acquired its loans from the banks and which wanted to get maximum value from debtors such as Ronan and his various companies.

At the time, Ronan’s main business, Treasury Holdings, which he ran with business partner Richard Barrett, was itself tied up in litigation with Nama, which was attempting to put it into receivership.

Sources on both sides of the row between Ickendel and Bewley’s maintained that the State agency backed the Ronan company, but Nama has steadfastly refused to comment.