Pharma giant MSD’s plant in Swords, Dublin, for over €25m

The 37,160sq m property on 33 acres marketed as a turnkey pharmaceutical facility 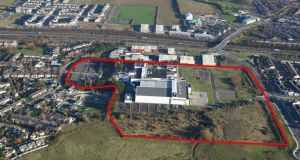 The pharmaceutical property is on Drynam Road in Swords, Co Dublin

More than three years after the global pharma giant MSD announced the planned closure of its women’s healthcare product business at Drynam Road in Swords, Co Dublin, the plant is finally to come on the market this week at a price expected to be over €25 million.

The former Merck Sharp & Dohme facility, close to Dublin Airport and the M1, originally employed 572 staff and is now thought to have about 50 as it prepares to wind up its operation towards the end of September.

Woody O’Neill of JLL, who is handling the sale, expects the plant to be of interest to other global pharmaceutical companies who want to gain a foothold in the Irish market and with access to the EU.

He says it may also appeal to pharmaceutical companies wanting to expand or consolidate existing operations in Ireland.

The facility has over 37,160sq m (400,000sq ft) of buildings and is to be marketed as a turnkey pharmaceutical facility. The 33-acre site has been developed with significant investment over several phases since it was originally occupied by Organon in the 1990s.

O’Neill says he expects significant interest in the plant because of its walk-in condition, proximity to the airport and the 15 acres of surplus zoned land, giving the campus expansion capability subject to planning permission.