Family had challenged lifting of legal bar on sale of former home on Vico Road, Killiney 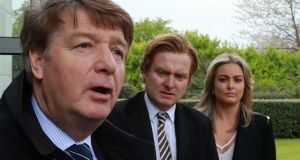 Brian O’Donnell with children Blake and Blaise. He said the purpose of the bank’s proceedings was to get possession of Gorse Hill to sell or rent it “but they have not done so.” Photograph: Nick Bradshaw

The Court of Appeal has dismissed an appeal by members of retired solicitor Brian O’Donnell’s family and by a company against a decision lifting a legal bar on the sale of the former family home on Gorse Hill, Vico Road, Killiney, Co Dublin.

In July last year, the High Court lifted legal notices called “lis pendens” which alert potential purchasers of pending litigation relating to the title of a property. They had been registered in March 2015 just after the adult O’Donnell children still living there had left following a failed lengthy court battle.

The notices were registered by Vico Ltd, the Isle of Man sole purpose vehicle set up by the O’Donnell family for the purpose of owning the luxury house.

The lis pendens in effect prevented the sale of the house by a receiver appointed by Bank of Ireland to recover €71 million owed by Brian O’Donnell and his wife Mary Patricia in unpaid loans.

The High Court granted the bank’s application to lift the lis pendens after finding they were registered for the “improper purpose” of frustrating the bank and receiver in dealing with the Gorse Hill property.

On Wednesday, the Court of Appeal dismissed the O’Donnell appeal against that decision. It also dismissed an application in which the O’Donnell’s asked a High Court judge, Mr Justice Brian McGovern, to withdraw from hearing the case.

They had claimed, while not alleging any impropriety, that Judge McGovern should recuse himself because his wife had been involved in a partnership dispute where there had been borrowings with Bank of Ireland.

At another hearing before a differently composed Court of Appeal, formal orders were made to reflect the court’s decision made last July that Mary Patricia O’Donnell is entitled to argue she has a right of residence at Gorse Hill arising out of the Family Home Protection Act, guaranteeing property entitlements to spouses.

Mr O’Donnell, who was in court for the decision with his son Blake, complained the purpose of the bank’s proceedings was to get possession of Gorse Hill to sell or rent it “but they have not done so.”

The court said it was not dealing with that issue and was only making a formal order to reflect its July decision.

The court also vacated a costs High Court order against the the O’Donnells in relation to that case and said it would make no order in relation to costs, which means both sides pay their own legal bills.

1 Belgium helps Ireland to a Brexit boon
2 Can Grafton Street stop the flood of closures?
3 ‘My rent here is so low it’s a joke’
4 New Powerscourt Springs hotel to open in defiance of virus gloom
5 This charming man: how Paschal Donohoe won the Eurogroup presidency
6 How to . . . move (almost) everything to your new phone
7 Why gift a son now if it eats into his tax-free inheritance threshold?
8 Goodbody loses a second suitor as Bank of China deal falls through
9 Ryanair accuses ‘screen scrapers’ of blocking refunds
10 AIB to compensate another 1,100 tracker mortgage holders
Real news has value SUBSCRIBE