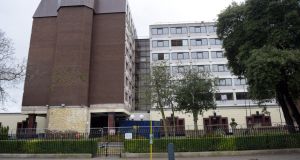 The Berkeley Court Hotel, or Clyde Court, on Lansdowne Road, Dublin, which closed on January 1st. Demolition on the building is expected to begin towards the second half of this month. Photograph: Bryan Meade

Chartered Land, the property group run by Irish developer Joe O’Reilly, has appointed contractors to demolish the former Berkeley Court hotel site in Ballsbridge to make way for 200 high-end apartments. Newry-based John Tinnelly & Sons has been appointed to demolish the former five-star hotel to prepare for the first phase of this multi-million euro residential development.

The contractors began work on the site last week. The initial focus is on removing and disposing of the interior structure of the hotel building – which was branded as the Clyde Court at the time it closed on January 1st. The demolition of the physical structure will begin in the second half of this month.

The development will involve 200 exclusive apartments in a pavilion-style development on Lansdowne Road. They will come to market next year with completions during 2018. More than 500 jobs will be created during construction.

The adjoining Ballsbridge Hotel – formerly known as Jurys – will continue to be traded by listed hotel group Dalata until at least the middle of 2018.

Andrew Gunne, chief executive of Chartered Land, said: “Our vision is to create a high-quality development of international standard that will ultimately enhance the Ballsbridge area. This site is unique in terms of both heritage and location and our approach to delivering this development will be mindful of this.”

The site hoarding will be erected behind both the existing railings and the iconic trees that are to be preserved. The existing landscaped area beneath the trees will be retained and maintained throughout the development.

Chartered Land is a leading property company with an impressive track record for developments of quality and scale, notably the Dundrum Town Centre.

A process to appoint the main contractor is currently under way. The selling agents for the site are Savills and Sherry FitzGerald.

The two Ballsbridge hotels were bought in the boom years by now bankrupt Carlow developer Seán Dunne for €400 million. He had intended to create a Knightsbridge-style development, including a 37-storey tower. However, these plans were scuppered by the property and banking crash in late 2008. Ulster Bank took control of the loans and sold the prime 6.8- acre site last year to Chartered Land and the Abu Dhabi sovereign wealth fund for more than €170 million.

There is a 10-year grant of planning permission to construct a 1.5 million sq ft urban quarter comprising 490 apartments, a 152-bedroom hotel, and associated retail and commercial space and community facilities. The permission expires in 2021. The development will include 11 residential blocks, most of which will range in height from six to 10 storeys.