One Ballsbridge will have a mix of offices, apartments and retail facilities 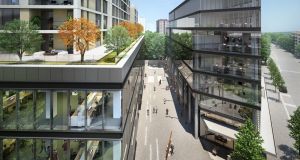 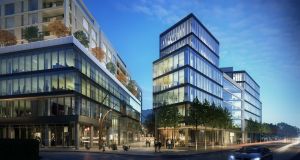 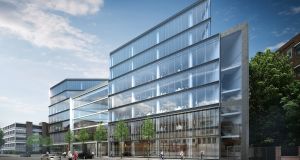 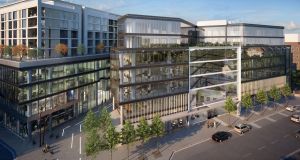 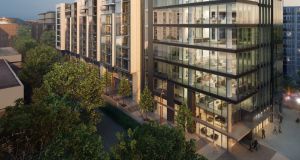 The first phase of a major new urban centre planned for Ballsbridge in Dublin 4, is being launched today through a marketing campaign for high quality offices due to be completed within two years.

One Ballsbridge will have a mixture of offices, apartments and retail facilities fronting on to both Shelbourne Road and Pembroke Road and will interlink with the adjoining 6.8-acre Ballsbridge hotel site, which is also to be redeveloped to accommodate 568 top-end apartments, a 152-bedroom hotel and associated retail and commercial space.

Both sites were sold during the boom for record prices only to be put back on the market after the crash at a fraction of their original values.

The 2.02-acre former Veterinary College site now to accommodate One Ballsbridge was originally bought by developer Ray Grehan for an astonishing €171.5 million. The Comer Group subsequently acquired it for €22.5 million – an 86.93 per cent discount. The Berkeley Court and Jurys hotels were bought by developer Sean Dunne in 2005 for €380 million, more than twice what they made when they were sold last July to Joe O’Reilly’s Chartered Land and the Abu Dhabi sovereign wealth fund.

The 10-year planning permission is due to run out in 2021, so the consortium is expected to begin development work in the new year on the 11 interlinked apartment blocks and the hotel and conference centre.

The Comer Group had similar concerns about planning deadlines and, according to Luke Comer, were in danger of losing at least 100,000 of the planned 510,000sq ft development particularly in the planned 10-storey residential building.

Luke Comer, whose company has brought in McHale Investments as partners in the scheme, said that when they started construction there were very few tower cranes to be seen in the Dublin skyline. “The commencement of this development could be compared to someone flicking a light switch as it brought a new confidence into the Irish property market.Within a few months renewed activity in the market was greatly evident.”

The combined O’Reilly and Comer sites covering an area of almost nine acres are by far the best available in the city for a mixture of top-of-the-range offices, apartments, five-star hotel, leisure centre, restaurants and bars, cafes and a healthcare facility. Ballsbridge looks set finally to become the number one choice for working and living in the city. The Comer site will accommodate a combined net office area of 12,541sq m (135,000sq ft) in three blocks which will be among the first to be offered for letting in the current office development cycle. The three segments will be:

Block 2 will be along a new street (New Pembroke Street) linking Shelbourne Road with Pembroke Road. It will have 3,716sq m (40,000sq ft) of office space on three levels as well as 88 spacious apartments and penthouses, a 1,858sq m (20,000sq ft) leisure centre and 225 car parking spaces. All three blocks will have hugely attractive retail facilities at ground floor level to broaden the appeal of the development. In addition, the O’Reilly scheme next door will have substantially larger shopping and restaurant areas.

Joint letting agents DTZ Sherry FitzGerald and JLL will be quoting in excess of €592 per sq m (€55 per sq ft) for the office accommodation in One Ballsbridge. The developers have made arrangements to speed up completion of any office blocks that are pre-let. The Comer Group has appointed the newly formed McGreevy Property Consultants to oversee the project.

Ronan Corbett of DTZ says he expects One Ballsbridge to become a multi-occupancy development because of the variety of office units available. Ultimately the diverse tenant mix would add greatly to the investment value of the project. He described the Comer Group as a “high pedigree” company with huge experience of building in London and Berlin.

Recent developments by the Comer Group in the UK include Princess Park Manor, a former asylum now turned into luxury apartments in north London, and Royal Connaught Park, a former public school in Hertfordshire where the Harry Potter movies were made and where luxury apartments cost up to £2.5 million.