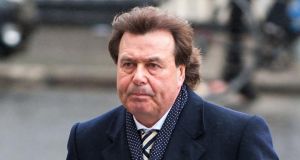 There were four bidders in the final shake-up for developer Brian O’Farrell’s portfolio. Photograph: Collins Courts

Patron is understood to have bought the loan portfolio, which includes the Northside Shopping Centre for a price in the region of €50 million.

The UK and Luxembourg real estate fund has about €2.5 billion under management. It has been actively bidding for Irish property assets for two years and in January bought the 165-bed Clarion Hotel in Dublin’s International Financial Services Centre for €33 million.

Runner-up
It previously bought Chief O’Neill’s hotel in Smithfield, north Dublin, and converted it into a Generator Hostel, and it was a runner-up in the bidding for the Morrison Hotel in Dublin, which was ultimately acquired by Russia’s richest woman, Yelena Baturina.

There were four bidders in the final shake-up for Mr O’Farrell’s portfolio. Initially CarVal Investors was tipped to buy the portfolio with a bid of €60 million.

In later negotiations the American investment fund is believed to have reduced this price, allowing Patron pull ahead. Development Securities plc and Fortress Investment Group were also both under-bidders for the loan portfolio.

The Northside Shopping Centre is located on the northern fringe of the M50 in Coolock and tenants include Dunnes Stores, New Look, SuperValu and Heaton’s.

Mr O’Farrell’s portfolio also includes a retail centre in Poland, a potentially valuable site in north Dublin, and a large house in the K Club.

The sale of his loans was handled by accountants EY, formerly Ernst & Young in a project code-named Drive.

The low profile property investor was one of the so-called Maple 10 developers who were lent money by Anglo Irish Bank to buy some of its shares that were formerly contracts for difference held by Seán Quinn. At the conclusion of a recent criminal trial into lending by three Anglo bankers to the Maple 10 and Mr Quinn, Judge Martin Nolan said he was impressed by the 10 developers. “They were certainly good men and acting with good motives,” he said.