Agency ‘very confident . . . we achieved the maximum value for the Irish taxpayer’ 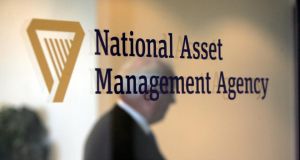 Nama sold €5.6 billion worth of loans against northern Irish properties to Cerberus for €1.7 billion in June 2014. The US fund hired US lawyers Brown and Rudnick, along with Northern Irish firm Tughans, as advisers. File photograph: Cyril Byrne/The Irish Times

State agency Nama on Tuesday defended the sale of its Northern Ireland loans, which has sparked a row over claims of corrupt payments and is facing parliamentary inquiries on both sides of the Border.

A Nama spokesman said on Tuesday the agency was “very confident in the robustness of the sales process and that we achieved the maximum value for the Irish taxpayer”.

Nama made the statement as the Law Society of Northern Ireland appealed to TD Mick Wallace and “any other person with relevant information” relating to his allegations concerning the portfolio’s sale to pass it on to the PSNI or Garda Síochána.

The society, which regulates solicitors in the North, said it is continuing an inquiry into the circumstances surrounding the resignation last January of Ian Coulter, former managing partner of Belfast law firm Tughans, which worked for the successful bidder, US fund Cerberus.

Mr Coulter left Tughans in January after it emerged he had diverted £7 million (€9.8 million) to an Isle of Man bank account. Mr Wallace has claimed some of this cash was earmarked for a prominent northern Irish politician and other figures. Nama sold €5.6 billion worth of loans against northern Irish properties to Cerberus for €1.7 billion in June 2014. The fund hired US lawyers Brown and Rudnick and Tughans as advisers.

Both firms had already consulted with another prospective buyer, Pimco, which left the process after informing Nama third parties had sought payments for working on its bid. Pimco did not engage these third parties.

On Tuesday in the Dáil Sinn Féin leader Gerry Adams claimed Pimco withdrew from the sale “after it was brought to Nama’s attention an attempt by a former Nama adviser Frank Cushnahan to solicit payments”.

Fianna Fáil leader Micheál Martin said it was Pimco’s compliance section that detected the approach and informed Nama, not the other way around.

Minister for Enterprise Richard Bruton refused calls by Mr Adams and Mr Martin for a formal commission of investigation into the sales process.

Cerberus and Brown and Rudnick have already confirmed they assured Nama they made no payments to anyone connected with the agency in their bid.

Nama sought those assurances before it agreed to sell the property loans to Cerberus.

The Dáil’s Public Accounts Committee is due to quiz Nama on the sale tomorrow. Meanwhile, the Northern Ireland Assembly’s finance committee plans to hold hearings into the deal next week.

Sinn Féin member Máirtín Ó Muilleoir said the committee should establish “were there any kick-backs” paid to anybody involved or were there “any fixers involved”.

The sale, dubbed Project Eagle, was welcomed on both sides of the Border. The North’s First Minister, Democratic Unionist Party assembly member Peter Robinson, met Cerberus board member and former US vice president Dan Quayle before the deal went through at Stormont in April 2014.

Cerberus confirmed on Tuesday Mr Coulter attended that meeting. The fund said it is a matter of public record and meetings of this nature are standard.