Dublin hotels Beacon, Morgan and Spencer sold to three businessmen for over €150m 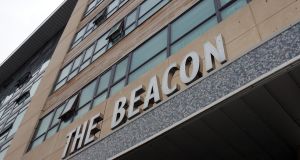 The Beacon Hotel in Sandyford, Dublin, which has been sold along with the Morgan and the Spencer hotels. Photograph: Matt Kavanagh

Mr Malone, property developer John Lally and former stockbroker Paul Higgins own the Westin and InterContinental hotels in Dublin along with properties in Galway and Limerick.

Fitzpatrick Lifestyle and its backer, London-based Patron Capital Partners, confirmed that the three had won the race to buy its three Dublin hotels, the Beacon, Morgan and Spencer, which it put up for sale earlier this year.

Neither side revealed details of the price, but it is understood that the winning bid was a little more than €150 million.

Fitzpatrick Lifestyle chief executive Paul Fitzpatrick said that the company was “delighted” to be handing over the hotels to a local operator.

“We wish the new owners the very best in this regard and trust that they will take these fine hotels on to continued and future success in what is a strong and improving market,” he said.

The three hotels will continue to trade under their current brands and under the charge of their existing managements.

Mr Fitzpatrick, a brother of hoteliers John and Eithne, is understood to want to step back from business to spend more time with his family. He set up the company in 2001.

His company put the three hotels on the market in June, when they were reported to have attracted bids ranging between €130 million and €150 million.

The 165-bedroom Spencer, formerly the Clarion, is in the capital’s international financial services centre area. Patron and Fitzpatrick bought it in 2013 for close to €33 million.

The Morgan is located in Temple Bar and is one of Dublin’s best-known hotels. The Beacon is in Sandyford, a commercial area that is home to Vodafone Ireland, Microsoft and Tullow Oil.

Mr Malone is a well-known Irish-American businessman. He is a majority shareholder in the Discovery Channel and Liberty Global, owner of Virgin Media, which in turn owns TV3 and the telecoms company of the same name.

He also owns Humewood Castle in Co Wicklow, which he bought from Mr Lally’s Lalco in 2012, and a number of TV production companies.

Demand for hotels in Dublin and other parts of the Republic is strong at the moment. This month, Spanish group Riu completed its purchase of the Gresham on O’Connell Street for €92 million.

Capnua Corporate Finance and CBRE advised on the Fitzpatrick deal.