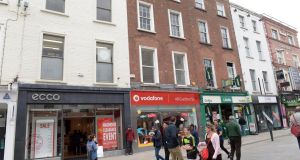 47-50 Grafton Street: could be amalgamated into one shop. Photograph: Aidan Crawley

Irish Life is expected to look at the feasibility of amalgamating four adjoining shops on Dublin’s Grafton Street following its recent purchase of number 50, the former Three Ireland store which is currently vacant.

The latest acquisition means the company now controls four premises in a row: 47 leased to Ecco; 48 rented by Vodafone; 49 occupied by Londis and 50.

Irish Life has a rental income of €1.1 million from the four buildings which could be combined to create either one spacious store or two reasonably large outlets.

The prospects for amalgamating the four stores was hinted at this week by Martin O’Reilly, head of property at Irish Life Investment Managers, when he said the acquisition of 50 Grafton Street enhanced the scale and tenant diversification of the retail parade and “provided a number of interesting value-accretive asset management opportunities across the four property block”.

Any move by Irish Life to combine a group of small shops on Grafton Street would be widely welcomed by the business community as a way of strengthening the city’s main shopping street and attracting those big name international traders which have been unable to find a suitable premises.

Irish Life may well have sufficient vested interests to change the fortunes of much of the street through its ownership of 17 buildings in all including several blocks. Last summer it paid about €154 million for a large chunk of the street which included McDonald’s, Office Shoes, Health Matters, Clarks and Pamela Scott. In addition to the recently assembled block at 47-50, the company also owns numbers 7-11; 57 and 58 and 85 and 86.

The company has seen the advantages of amalgamating two outlets after buying the newly assembled flagship store for Life Style Sports at 57-58 Grafton Street.

The stylish premises replaced two smaller traders, Zerep and Richard Alan, and created 1,150sq m (12,400sq ft) of space over five levels with more than half of it suitable for retail use on two levels.

Irish Life paid €6.75 million to the Layden Group for its most recent purchase, number 50 Grafton Street, which is rented at €380,000 a year and which will show an initial yield of 5.4 per cent.

Three Ireland is not currently occupying the 223sq m (2,400sq ft) building but is expected to agree a subletting shortly for the remaining 7½ years on the lease.

The building is on a busy stretch of the street, diagonally across from the main entrance to St Stephen’s Green Shopping Centre. Irish Life also holds a substantial stake in that centre.

The assurance company is not the first to have planned an amalgamation of some of Grafton Street’s small retail units. Friends First had a similar plan to redevelop the top section of Grafton Street and link it into shops around the corner on St Stephen’s Green but had to abandon the scheme when the property market crashed.

Irish Life was advised on its latest purchase on Grafton Street by Colm Luddy of CBRE.