Up to 100 jobs were envisaged in Tullamore hotel, conference centre, shops and cafes 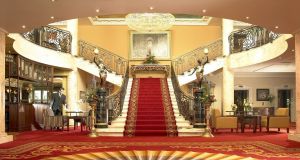 A plan by a prominent businessman to develop a major new hotel and casino in Tullamore, Co Offaly has been refused planning permission.

As many as 100 jobs were expected to be created with the opening of the development, which was to include an 86-bedroom hotel, conference centre, casino, retail units and restaurants and bars.

The proposal, which involved the redevelopment of two protected structures, was made by Bridge House Hotel, which is owned by businessman Patrick Leneghan, who previously held the lease on the landmark Earl of Kildare Hotel (now the Kildare Street Hotel) near Trinity College in Dublin.

The new five-storey hotel, which was to be linked to the existing Bridge House Hotel via a specially constructed bridge, was to be at Water Lane and Distillery Lane.

Planners ruled the development would have a “profound negative impact on the appearance and visual amenity of the streetscape of Tullamore.”

They also said the development would “conceal from view the historic nature of the industrial Malt House,” and added that it did not appear to provide for adequate parking facilities.

It is not known if Mr Leneghan plans to appeal the council’s decision.

1 Moving in and out of lockdown is a recipe for economic disaster
2 Shed Distillery in Leitrim to open €3m visitor centre next month
3 Objectors stall production of enough timber for 5,000 houses
4 Revised help-to-buy scheme opens for applications
5 IMRO speeds up royalty payments to Covid-hit musicians
6 Glanbia sees sharp decline in earnings due to Covid-19 crisis
7 UK tips into deepest recession on record after 20% contraction
8 Urban micro-farm growing vegetables in heart of community
9 Stripe lures Dhivya Suryadevara from General Motors to be CFO
10 ‘No demand... because there are no people’ at well-known Dublin pub
Real news has value SUBSCRIBE