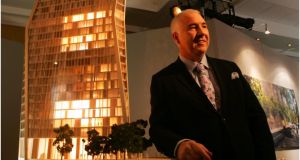 Developer Seán Dunne with a model for the proposed development on the site of Jurys and the Berkeley Court hotels in Ballsbridge. Photograph: Bryan O’Brien

The Berkeley Court and Jurys hotels in Ballsbridge were bought by developer Seán Dunne at the peak of the property boom in 2005 for an astonishing €380 million, more than twice what the consortium including shopping centre king Joe O’Reilly has just paid it.

The hotels, now known as the Clyde Court and Ballsbridge hotels, on a combined 6.8-acre site, were at the time among Ireland’s most expensive properties; their price per acre was topped shortly afterwards by the neighbouring 2.02-acre UCD veterinary college site bought by Ray Grehan for €171.5 million – the equivalent of €84 million an acre.

Dunne said he wanted to turn Ballsbridge into the “new Knightsbridge” and create a “Manhattan-like lifestyle”.

In August 2007, two weeks after closing down the two hotels, he made his first application to Dublin City Council to redevelop the site. The €1.5 billion scheme included a plan for a 37-storey, 132-metre high residential tower that would be “cut like a diamond”, as well as a multistorey embassy complex and office block, a 232-bedroom luxury hotel and an underground shopping mall.

In March 2008, two months after Dunne reopened the hotels as D4Hotels, the council granted permission for most of the development, apart from the 37-storey building.

Dunne appealed the decision to An Bord Pleanála. His appeal was one of 127 made to the board on the planning permission, an unprecedented number. Some 30 appeals were from those who wanted the scheme rejected, including politicians and local residents. Among them was financier Dermot Desmond who warned that the proposed 15-storey embassy block would be a “sitting duck” for terrorists.

However, there were a surprising number of submissions in favour of the project. Appellants in favour included Gate Theatre director Michael Colgan, who acted as cultural adviser for the project, the late public relations consultant Bill O’Herlihy and Shrewsbury Road resident Michael Maughan, founder of WHPR, as well as four solicitors firms, three builders and four estate agents/chartered surveyors.

In October that year, Dunne returned to the council with a significantly scaled back proposal. The 37-storey tower, which Dunne and his architects said had been essential to the original scheme was gone, as were the embassy and retail buildings.

The new proposals were for a more modest €300 million scheme with a 15-storey tower and a 135-bedroom hotel. The plans were approved by the council in August 2010, but were again appealed to An Bord Pleanála by 21 parties. This time almost all were opposed to the project.

An Bord Pleanála granted planning permission in September 2011, with the tower reduced in height to 12 storeys but, by the following January, Dunne had lost control of hotels to his lenders, a syndicate of banks lead by Ulster Bank.

The existing hotels, with almost 600 bedrooms, are currently operated by the Dalata Hotel Group on behalf of the banks.

Mr O’Reilly himself has not been untouched by the property crash. He has reportedly been Nama’s largest debtor, owing the agency €2.8 billion at one point. His flagship €1 billion-plus Dundrum Town Centre has been described as the “crown jewel” in the Nama portfolio.

In a twist to the tale, Nama is understood to have recently appointed Eastdil Secured, a subsidiary of Wells Fargo, to handle the sale of Dundrum Town Centre. Eastdil acted as joint agent on the sale of the former Berkeley Court and Jurys hotels.

The Bord Pleanála permission granted for the Ballsbridge site in 2011 lasts for 10 years. O’Reilly and his international partners can choose to use it or start the planning process over again with the council.

The current permission would allow him to build 11 interlinked residential blocks and a separate building to accommodate a 150-bedroom hotel with a conference centre. The 11 blocks with arcaded walkways are to accommodate 568 large apartments aimed at the top end of the market.

Most of the blocks will range in height from six to 10 storeys. The development will include a mixture of private, semi-private and public open spaces.