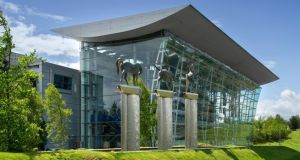 Citywest Business Campus is to invite offers in the region of €4.8 million for its freehold interest in a ground lease at a printing plant owned by Independent News and Media fronting on to the N7 in Dublin 24.

John Moran of agents Jones Lang LaSalle is also guiding €2 million for an office/warehouse investment involving the Abbott Laboratories Facility in the park.

Independent News and Media spent a reported €50 million on the development of its printing operation in 2000 after agreeing to lease the high- profile site of 4.39 acres from the owners of the park, Davy Hickey Properties.

The 200-year lease from August 2009 includes an option to assign the lease to the landlord in 2024 and each 10th subsequent year.

The Independent group is currently paying an annual ground rent of €402,532 on an upwards-only basis linked to the performance of office rents in the campus.

The newspaper company has used the site to good advantage, building a landmark design press hall, 57 feet in height and 200 feet in length.

Equity stake
Jones Lang LaSalle will tell interested investors that they will benefit from at least 11 years income at a return of 8.02 per cent.

It is thought unlikely that the Independent group will attempt to buy out the ground rent only a month after persuading a consortium of eight banks, including the State-owned AIB, to write off debts of €138 million in exchange for an equity stake in the group. The deal is expected to reduce the group’s debt to €118 million by year end.

Meanwhile, Jones Lang is offering a high-yield return of 12.92 per cent on the guide price of €2 million for the purpose-built office/warehouse facility occupied by Abbot Laboratories Ireland Ltd since 2001.

The warehouse has two full- height loading bays and an eaves height of 9 metres. The offices have a modern fit-out including raised access floors, floor boxes wired for power, suspended ceiling with recessed light and a double height reception area.

Earlier this year, an overseas investor paid just over €14 million for a two-storey office block let to international company SAP at Citywest. The transaction is showing a return of 11.2 per cent after costs.