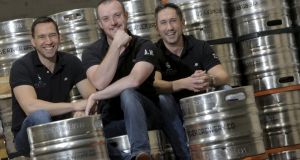 Niall Phelan, Alan Wolfe and Tom Cronin of Rye River Brewing: it is 75 per cent owned by the co-founders with family and friends holding the balance of shares

Rye River Brewing, the makers of the McGargles Irish craft beers, is seeking to raise €7 million from outside investors to fund its ambitious expansion plans.

This includes a minimum of €100,000 in crowdfunding via the Kickstarter platform, beginning next week. It is also seeking to tap EIIS funding and is in talks with domestic investment funds.

The company moved to a new brewery in December in Celbridge, Co Kildare, which will boost its capacity from two million litres a year to 11 million by 2019.

The funding will also be invested in a visitor centre, a taproom and an innovation pilot plant, as well as supporting expansion into new markets.

It has also been growing its business in France, Germany, South Korea and the US, with exports now making up half of its sales. In addition, it has deals with Bavaria, San Miguel and Scotland’s Innis & Gunn to distribute their beers in Ireland.

It has a private label contract with Lidl to supply stores in five countries, along with exclusive brand deals with Tesco and Dunnes Stores.

“2015 was a great year for us in one respect [turnover] but a challenging one in another,” Mr Phelan said, noting that it moved brewery, opened a bottling plant and began propagating its own yeast.

“We’re looking at about 50 per cent growth for this year.”

Rye River Brewing is 75 per cent owned by its co-founders – Mr Phelan, Alan Wolfe and Tom Cronin – with family and friends holding the balance of shares. Mr Phelan said the new investors would probably get 20 per cent of the equity between them.

The brewer employs 60 staff and produces a range of 15 beers, including six under the McGargles brand.