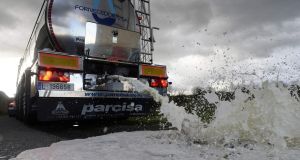 Portuguese farmers protest by dumping milk from tanker: While France and Germany have opted for modest increases in production, other states, such as Ireland, have gone for broke . Photograph: Miguel Riopa/AFP/Getty

The optimism that greeted the ending of milk quotas has been routed by a persistent slump in global dairy prices that shows no sign of abating.

Despite forecasts for a pick-up in the first quarter of 2016, the latest Global Dairy Trade auction – which set the benchmark for prices globally – recorded a decline of 2.8 per cent in average prices this week, its fourth consecutive drop. From the middle of 2014, prices are down roughly 40 per cent. The slide has eroded margins for Ireland’s 17,500 dairy farmers and wiped about €800 million off the sector’s value.

The slump was initially linked to a reduction in Chinese demand, the Russian trade embargo and a glut in production during the preceding period.

However, overproduction in Europe on the back of the lifting of quotas now appears at fault, a cruel irony for Irish farmers, who have been schooled to view the free market as a certain windfall.

While France and Germany, the apex predators of the European market, have opted for modest increases in production, other states, such as Ireland, have gone for broke. The sector here is targeting a 50 per cent increase in output between now and 2020. To do this dairy farmers have been ramping up production for the past two years – egged on by a welter of forecasts suggesting global dairy consumption rates would soar on the back of Asia’s emerging middle class.

The slump has not rubbished these predictions but it suggests a more complex market and perhaps the need for some price-hedging tools and a more flexible tax system. For farmers used to enjoying protection that guaranteed prices – usually twice the global average – the post-quota era has been a rough ride.