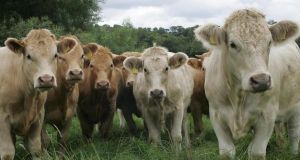 CSO figures suggesting just over €11m worth of beef was shipped to China last year and €9m the previous year are a mistake it seems. Photograph: Brenda Fitzsimons

Several high-profile food scandals, including the horsemeat debacle here, have heightened public anxiety about the provenance of certain foods. So it’s somewhat disconcerting to discover that several Irish producers don’t seem to know if its beef or pork they’re selling.

A recent request for export data from the Central Statistics Office (CSO) revealed that a small group of companies were exporting beef to China – apparently in contravention of an embargo – and had been for some time.

Irish beef has been banned in China since the height of the BSE crisis in the late 1990s. While Beijing announced the lifting of the embargo last year, a formal agreement has yet to be finalised.

Nonetheless, CSO figures suggested just over €11 million worth of beef was shipped to China last year and €9 million the previous year.

Alarmed by the transgression and its potential impact on the reopening of the Chinese market, authorities here contacted the companies involved only to be told the exports had been wrongly registered as beef when, in fact, they were pork.

Crisis over. However, it’s a little peculiar that several companies made the same mistake. The pork exports appear to be mainly offal and other sub-prime cuts, which western consumers avoid.

The Department of Agriculture has been patiently weaving its way through a labyrinth of Chinese bureaucracy in the hope that trade can resume later this year.

An unexpected case of BSE in Co Louth last year has delayed the process and lost the State its coveted “negligible risk” status for the disease.

An illicit export trade might have proved awkward to explain.

The importance of China as a beef market for Ireland is difficult to weigh up. Per capita consumption is forecast to rise to 5.47kg per person by 2021, which equates to an extra 1.68 million tonnes of additional demand.

Larry Goodman, the founder of ABP Foods, Ireland’s largest beef processor, already has a team on the ground, if that’s anything to go by.