Price and sales of shark fin, long a mainstay at banquets, are down by 50 to 70 per cent in China 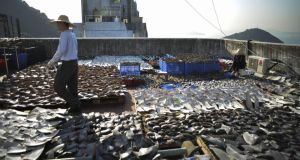 President Xi Jinping’s crackdown on corruption aims to root out all corruption in the country, whether it involves massive wealth accumulated by the powerful “tigers” of the elite or backhanders palmed over to the “flies” at the bottom of the Communist Party.

One of the most dramatic side-effects of the crackdown has been a fall in the price and sales of shark fin, long a mainstay at banquets, which are down by 50 to 70 per cent in China, according to a report from WildAid.

The report, called Evidence of Declines in Shark Fin Demand, China compiles public opinion surveys, surveys from shark fin vendors and traders in the markets of Guangzhou, which has long been the center of China’s shark fin trade, and surveys of shark fin price data from Indonesian shark fishermen, as well as trade statistics and media reports. Some of the figures are pretty staggering.

An amazing 85 per cent of Chinese consumers surveyed online said they gave up shark fin soup within the past three years. And two thirds of these respondents cited awareness campaigns, and 28.2 per cent said it was because of the government ban on banquets. “The more people learn about the consequences of eating shark fin soup, the less they want to participate in the trade,” said Peter Knights, the executive director of WildAid.

“Government bans on shark fin at state banquets in China and Hong Kong also helped send the right message and this could be a model to address issues, such as ivory.”

One of the most popular activists to stop the consumption of shark fin was legendary basketball star Yao Ming, whose campaign encouraged president Xi’s administration to ban shark fin from state banquets. He has now turned his attention to ivory and rhino horn. Perhaps that market is about to bottom out too.