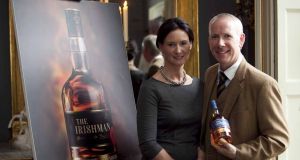 Irish whiskey has been going through a resurgence in recent years and while its sales may still be minimal when compared to Scotch or bourbon, it has been the fastest-growing premium spirits category globally over the past five years.

Given its recent success it is not surprising to see many wannabe whiskey makers seeking to get a piece of the action.

But one distillery that got into the game when the spirit was still very much in the doldrums is Co Carlow-based Walsh Whiskey, which is behind both The Irishman and Writers Tears brands.

With construction under way on a new €25 million distillery and visitor centre in Royal Oak that will produce six million bottles a year, the founders are optimistic that demand for whiskey will continue to soar.

The family-run Walsh Whiskey Distillery, which is celebrating its 16th year in business, already produces 60,000 cases of whiskey a year. It has recorded revenue growth of 300 per cent over the last five years, with 95 per cent of sales coming from exports.

In partnership with Italian drinks giant Illva Saronno, which owns Tia Maria, the company is now planning on expanding into newer markets such as India and China.

“Irish whiskey hasn’t really arrived in Asia yet but it will be there in five years’ time. The difficulty is getting a good route to market, which is where our relationship with Illva comes into play as working with them gives us access to a massive distribution network,” said Bernard Walsh, who cofounded the company with his wife Rosemary in 1999.

Mr Walsh who is also chairman of the Irish Whiskey Association, which comprises heavyweights such as Irish Distillers and Bushmills and more recent entrants like Teelings and Dingle Distillery, said there are plenty of growth opportunities for producers.

“Irish whiskey is the fastest growing whiskey category and the fastest growing brown spirit but, putting it into perspective, it’s still relatively small. We’re at between 6.5 million and 6.7 million cases globally, while Scotch is at just under 90 million,” he said.

“We did knock on the doors of finance houses in Dublin early on but the common response we received was that once we’d raised a few million ourselves and got the distillery going, they’d be happy to talk business with us, which didn’t suit us” he said.

Bernard and Rosemary wound up in the spirits trade after spending a number of years working in IT in London.

Moving back to Ireland, the couple came up with an idea for a premixed Irish coffee, which came to be branded as The Hot Irishman.

Inspiration for the brand came from the time Rosemary had run a ski chalet in France and would regularly treat guests to Irish coffees after evening meals.

Deciding it was a labour-intensive process, she thought there had to be a better way to make a consistently good Irish coffee without the faffing.

The product was a big success early on and served as the couple’s introduction to the world of whiskey as they ended up working with Irish Distillers to source the base ingredient.

As the business grew, with the Walsh’s introducing a number of liqueurs in the following years, the company thought about bringing out its own whiskey.

“Everyone wants to get into the trade but it takes many years. At the moment, demand is high but supply is not there, hence the rush by producers to lay down stocks. We’re lucky because we have stocks but we’re trying to augment that now with the development of the new distillery,” said Mr Walsh.

For the Walsh’s, funding for the distillery has come in part from linking up with Illva Saronno in late 2013.

“It’s a hands-off scenario overall but we don’t want it to be too much that way because we want to avail of their expertise. Illva has huge market experience and we want to be able to tap into that,” he said.

In addition to opening up the new distillery, which will see employee numbers at Walsh Whiskey rising to 55 people, the company intends to keep building brand awareness.