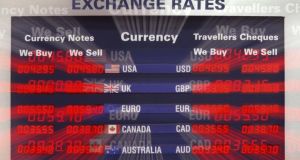 Traders at some of the world’s biggest banks manipulated benchmark foreign-exchange rates used to set the value of trillions of dollars of investments. Photo: Bloomberg

Traders at some of the world’s biggest banks manipulated benchmark foreign-exchange rates used to set the value of trillions of dollars of investments, according to five dealers with knowledge of the practice.

Employees have been front-running client orders and rigging WM/Reuters rates by pushing through trades before and during the 60-second windows when the benchmarks are set, said the current and former traders, who requested anonymity because the practice is controversial.

Dealers colluded with counterparts to boost chances of moving the rates, said two of the people, who worked in the industry for a total of more than 20 years.

The behavior occurred daily in the spot foreign-exchange market and has been going on for at least a decade, affecting the value of funds and derivatives, the two traders said.

The Financial Conduct Authority, Britain’s markets supervisor, is considering opening a probe into potential manipulation of the rates, according to a person briefed on the matter.

“The FX market is like the Wild West,” said James McGeehan, who spent 12 years at banks before co-founding Framingham, Massachusetts-based FX Transparency, which advises companies on foreign-exchange trading, in 2009. “It’s buyer beware.”

The $4.7-trillion-a-day currency market, the biggest in the financial system, is one of the least regulated.

The inherent conflict banks face between executing client orders and profiting from their own trades is exacerbated because most currency trading takes place away from exchanges.

The WM/Reuters rates are used by fund managers to compute the day-to-day value of their holdings and by index providers such as FTSE Group and MSCI that track stocks and bonds in multiple countries.

While the rates aren’t followed by most investors, even small movements can affect the value of what Morningstar estimates is $3.6 trillion in funds including pension and savings accounts that track global indexes.

One of Europe’s largest money managers has complained about possible manipulation to British regulators within the past 12 months, according to a person with knowledge of the matter who asked that neither he nor the firm be identified because he wasn’t authorised to speak publicly.

The FCA already is working with regulators worldwide to review the integrity of benchmarks, including those used in valuing derivatives and commodities, after three lenders were fined about $2.5 billion for rigging the London interbank offered rate, or Libor.

Regulators also are investigating benchmarks for the crude-oil and swaps markets.

“The FCA is aware of these allegations and has been speaking to the relevant parties,” Chris Hamilton, a spokesman for the agency, said of the WM/Reuters rates.

It may be difficult to prosecute traders for market manipulation, as spot foreign exchange, the trading of one currency with another at the current price for delivery within two days, isn’t classified as a financial instrument by regulators, said Arun Srivastava, a partner at law firm Baker and McKenzie in London.