When Ali came to Ireland

Muhammad Ali has died at 74. He was famous for his quotes, here are some of his best. Video: Reuters 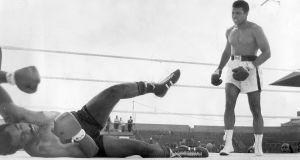 Al “Blue” Lewis at full stretch on the canvas after taking a thunderous left to the jaw from Muhammad Ali in the fifth round of their fight at Croke Park. Photograph: Tommy Collins/The Irish Times

Muhammad Ali caused a stir in Dublin in July 1972. He was due to fight Al ‘Blue’ Lewis in Croke Park and his arrival briefly drew the nation’s attention away from the horrors of the Troubles.

This charismatic fighter who held the world’s attention during his reign as boxing champion would inspire so many with his quick wit, his social conscience and his steadfast opposition to the Vietnam War.

Always good for a quote, Ali did not fail to delight the large press pack that gathered at Dublin Airport to greet his arrival.

‘Joe Frazier got the decision. Frazier also got the beating. His face was so ugly after that fight, man , it should have been donated to the Bureau of Wildlife,’ he told them.

“It’s hard to be humble when you’re as good as I am,” The Irish Times’ Aidan McCarthy quoted him in the following day’s newspaper.

Almost as if to match Ali’s reputation, Sugrue came with a formidable one of his own. The former circus strongman was also known as “Ireland’s Strongest Man” and at one point in his varied career famously pulled a bus across Westminster Bridge with his teeth.

During his stay in Ireland, Ali was interviewed for RTÉ by former Irish Times journalist Cathal O’Shannon who would later describe his encounter with the heavyweight as the highlight of his career .

During the interview Ali spoke out about the situation in Ireland in the US. He went on to recite a poem he wrote about the infamous Attica Prison riot in 1971 and the interview would later feature in a documentary on his visit called ‘When Ali came to Ireland’.

Ali also recorded a special promotional video to promote the Lewis fight during which he promised to return to Ireland for a ‘real rest and a true holiday’.

Perhaps foreshadowing a controversy that would break out in another sport decades later in Saipan, fight organisers were criticised over the lack of facilities made available to the fighters. Apart from the training area itself no facilities had been provided and Lewis had to be content with a session of light jogging and shadow boxing.

His advisor, Don Elbaun, reportedly annoyed at the treatment said: “We had expected everything to be in readiness ,” he said.

While it was perhaps no surprise that the fight was only attended by just over 18,000 people Muhammad Ali’s presence in Ireland was felt by many more than just those who watched him win the Croke Park fight with a technical knockout in the 11th round.

Almost 30 years after beating Al “Blue” Lewis in the same stadium, Muhammad Ali would receive a rapturous welcome when he returned to Croke Park in June 2003 with the athletes of the US Special Olympics team.

During his visit he met with many luminaries but perhaps the highlight was when he took a “straighleft” on the chin, landed by none other than Nelson Mandela.

In a tradition usually reserved for US presidents, Ireland claimed the charismatic boxer as one of their own, making him an honorary freeman of Ennis in 2009.

As many as 10,000 people gathered to witness him become the first to be conferred with the title of honorary freeman of Ennis on a day described by his wife as one of the most exciting days of his life

Ali’s great-grandfather Abe O’Grady left the town to emigrate to the US in the 1860s.

In an interview with RTÉ, Ali’s wife said: “I have never seen anything like this before and neither has he. He was overwhelmed by it, really ecstatic. It was better than any medicine you could give him. He was excited and surprised by the outpouring of people, even the children who were out in the street. It was wonderful.”

1 Suarez’ Italian language exam rigged according to prosecutors
2 Awarding of 2023 Rugby World Cup to France part of Laporte investigation
3 Gerry Thornley: Talk of Anglo-French hegemony is over the top
4 Tottenham’s Carabao Cup tie at Leyton Orient off but no decision on walkover
5 LeBron James has become this generation’s Muhammad Ali
Real news has value SUBSCRIBE
Here is your handy guide to sport on television this week