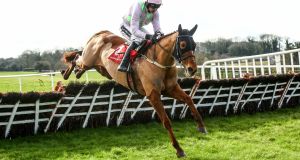 Annie Power won with ease on her return at Punchestown yesterday. Photograph: Inpho

Real Madrid have one foot in the Champions League quarter-finals after they beat Roma 2-0 at the Stadio Olimpico last night.

The Giallorossi’s staunch resistance was broken by Cristiano Ronaldo after 57 minutes, before Jese effectively sealed the tie for Zinedine Zidane’s side with a late strike past Wojciech Szczesny.

After being heavily touted as the next Irish rugby star set to ply his trade abroad Cian Healy has committed his future to Leinster, signing a three-year deal which keeps him with the province until after the 2019 Rugby World Cup.

Faugheen out of Cheltenham

Meanwhile racing fans have been dealt a huge blow with the news the mighty Faugheen will miss the Cheltenham Festival through injury. Annie Power, who won comfortably on her return at Punchestown yesterday, has now replaced her stable mate as favourite for the Champion Hurdle.

Somebody who is hoping to appear at Cheltenham is former-cycling star Victoria Pendleton, who makes her chase debut as a jump jockey in the 4.15 at Fakenham. As part of this week’s Women in Sport features, Malachy Clerkin has looked at Pendleton’s attempt to switch saddles and line-up in the Foxhunters.

In her column today Sonia O’Sullivan discusses athletics at junior level and the relationship between enjoyment and competition, she writes: “The enjoyment of sport and the ability to be competitive must balance out. As soon as the competitiveness becomes more important than the enjoyment, then the level of competitiveness will drop.

“A bit like hitting a golf ball; the harder you try, the worse your shot.”

The Northern Trust Open starts today at Riviera with Rory McIlroy making his competition debut as his Masters preparations begin in earnest.

One man who isn’t in the field is Shane Lowry, but the Offaly man is pleased with his efforts so far this season, he said: “My first stretch of tournaments on the PGA Tour for the season has left me pretty happy, and, looking back at the whole picture of the three tournaments, it was a good start to the year.”