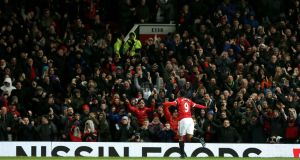 Leicester City’s mission to become the most improbable title winners of the Premier League era remains on course after they beat Liverpool 2-0 at the King Power Stadium last night.

Jamie Vardy scored twice - his first a quite stunning long distance volley - to help Claudio Ranieri’s side maintain their three point lead at the top.

Meanwhile Manchester United delivered one of their best performances of the season as they cantered past Stoke City 3-0 at Old Trafford - Anthony Martial’s sumptuous curling finish, which ended a fine team move, the pick of the goals.

Elsewhere Arsenal’s title hopes took another dent as they drew 0-0 with Southampton, Manchester City held on to beat Sunderland 1-0 away, Tottenham Hotspur made it five wins on the spin thanks to a Harry Kane double at Norwich, Aston Villa still appear doomed after a 2-0 loss away at West Ham, Salomon Rondon rescued a late point for West Brom at home to Swansea and Bournemouth beat Crystal Palace 2-1 at Selhurst Park.

The Six Nations is nearly upon us and in his column today Gordon D’Arcy looks at the key role Johnny Sexton will play in Ireland’s opener against Wales on Sunday, he writes: “He remains the most important figure in Irish Rugby. If he stays fit, if he rediscovers his form, and providing there is quick ball, he will make things happen.”

But D’Arcy also rues the cruel injury which has ruled Luke Fitzgerald out of the competition: “Bar the obvious retirement and injuries, I don’t expect major surgery to the Ireland team we saw at the World Cup but Luke Fitzgerald’s desperately unfortunate knee injury changes the dynamic significantly.

“For me, along with Sexton and Murray, he was bolted-on to start this match. Luke was the form back in Ireland over the winter months.”

Keep an eye out today for our 2016 Six Nations magazine, which provides an in-depth preview of the tournament and is available free with every copy of the Irish Times, as well as online.

The GAA recorded a €500,000 drop in revenues in 2015, a marginal decline caused by a fall-off in gate receipts for the All-Ireland hurling championship.