Despite sunburn, Ireland captain has no complaints about life in the MLS with LA Galaxy 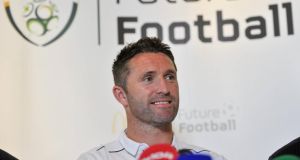 The tourist from Kentucky patrolling the grounds of Malahide Castle expressed his surprise that it was, indeed, true: Ireland can experience four seasons in no time at all. Already, he said, he’d witnessed snow, sleet, hail, rain and sunshine since he arrived an hour before, and with that there was a cacophonous rumble of thunder overhead just to, almost, complete the deck.

On being told a resident of California was about to arrive at the Castle, he offered his sympathy, reckoning he was going to feel “mighty cold”.

But Robbie Keane isn’t exactly a stranger to the climate, although the sun tan he sported yesterday when he turned up for the launch of the McDonald’s FAI Future Football Programme did make him stand out in the crowd.

He, though, was less kind about his colouring. “Playing at 2pm on a Sunday afternoon, 25 degrees or something, not good for my Irish skin – that’s why I’m so red,” he said of the upshot of his latest appearance for LA Galaxy.

The 25 degrees elicited no consoling hugs from an audience clad in thermals, although if that roof remains open in Stockholm on Friday night, and the temperatures, as forecast, reach minus 10 degrees mid-game, there might be a little more sympathy for the Ireland captain.

But other than sun-burn issues, Keane has no complaints about life in Los Angeles where his profile has risen notably since being appointed captain of the club and where, since the departure of David Beckham, he is now LA Galaxy’s best known import.

“But it doesn’t really bother me too much, I don’t really care that I’m on the back of buses and billboards and stuff like that, to be honest with you,” he said.

“It’s one of those things that comes with being an LA Galaxy player, being in the public eye, living in Hollywood, that’s just the way it is. It’s not something I think about too much.”

“He told me the whole history of Captain’s Road in Crumlin, where my family is from.

“He said his granddad and my granddad [Thomas Nolan] were cousins. I had no clue. I asked my mother ‘how come no one’s ever said anything, it’s not something you don’t tell people’.

“She said her brother had been saying for years that was the case, ‘but we didn’t think anything of it’.

“I went to see his gig a few weeks ago in the Staples Centre. Lovely man, very charming fella. He looks like a Nolan as well. He looks like my grandad.”

And then he scratched his head, still coming to terms with the sheer wackiness of it all.

But other than hanging out with Morrissey and going to “quite a lot” of LA Lakers’ basketball games, Keane’s focus, he said, remains on his football rather than the high life, and despite carrying a couple of injuries, he is, he insisted, in good shape and feeling the benefits of not going out on loan during the American off-season.

“I couldn’t have gone on loan because I’d too many injuries. I’ve a shoulder injury which, eventually, I’ll need an operation on, but I’m managing to get by at the moment.

“My Achilles’ is still playing up, so I was told to rest that. It’s getting managed very well by the club, but towards the end of last season I could hardly run, it was really effecting me, but the rest for those six weeks has done me the world of good. If I’d carried on playing it probably would have snapped.”


Surprised
So then, he said, he’s all set for Sweden and Austria. But no Kevin Doyle in the squad. Surprised?

“Yeah, I think probably everybody was, Kevin’s done fantastically for the country. Obviously things aren’t going too well at Wolves, but that’s certainly not down to Kevin.

“But the manager made that decision and you have to respect it. But things can easily change around, Kevin scored at the weekend, so he could be in the next squad.”

Anything can happen with his own future too, he said. Will he stay in America?

“I don’t know, I’m going to become a coach or manager, so who knows? It’s very hard to predict what’s going to happen, I’m going to play as long as I can.

“I see Michael Owen is going to retire at the end of the season, the two of us came through at the same time. I dread the day I have to finish playing because this is my life. It’s just what I love doing.”