Pat Fenlon not giving up on Rovers' European dream 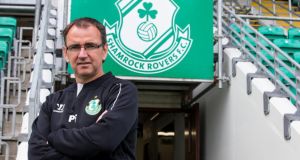 Shamrock Rovers manager Pat Fenlon: “We simply need to score the first goal. If we can do that, then the tie changes.” Photograph: Gary Carr/Inpho

Pat Fenlon has told his Shamrock Rovers players that there is a first time for everything as they look to make a little bit of history in Norway tonight to stay in the Europa League.

No League of Ireland side has overturned a defeat from a home first leg in Europe, never mind a 2-0 deficit.

Odds Ballklubb, currently seventh in the Norwegian Tippeligaen, beat Rovers at Tallaght Stadium last week. Canadian international Olivier Occéan scored both goals, the first from a harshly-awarded penalty and then, perhaps more annoyingly for Fenlon’s side, following a corner.

“What I said last week afterwards still stands, there wasn’t very much in the game,” said Fenlon. “We created a few chances that we needed to take and didn’t. It’s now no different over here. We simply need to score the first goal. If we can do that, then the tie changes.

“That will give us a chance. That’s what we’ve got to do, get that first goal. Whether that’s early or late is irrelevant. We will go for it. But I think going into European games you have to be aware of everything. If it’s still in the melting pot later on we’ll obviously have a game plan for that.

“But we’ve got to make sure we stay in the game and try to nick the first goal. Whether that’s after ten minutes or with 10 or 15 minutes to go, we’ll take either.”

With a two-goal lead, and at home on their own astro pitch, Odds will be bullish about easing through. Rovers simply must do what they didn’t in the first leg – try to keep a clean sheet and score, at least twice.

“We’ve got be very compact when we defend, but we’ve also got to try to nick a goal, that’s the important thing.”

With Keith Fahey, Stephen McPhail, Damien Duff and Sean O’Connor all still out injured, Rovers work with the same squad from the first leg.

“It would be brilliant if we can do it, I’ve said that to the players, it would be a first for a League of Ireland side,” added Fenlon. “There is obviously a first time for everything. . .”

1 Connell losing touch with club championship is real tragedy of Normal People
2 The Game Changers: Ger Loughnane and the spark that lit the Clare hurling revolution
3 Shane Ryan: Shark attacks and gruelling shifts on a Covid-free Atlantic mission
4 Ghosts and goalposts: The soul of street football in Dublin’s Gloucester Diamond
5 Gerry Thornley: Coronavirus crisis could be terminal for Ireland's rugby clubs
Real news has value SUBSCRIBE
Crossword Get access to over 6,000 interactive crosswords