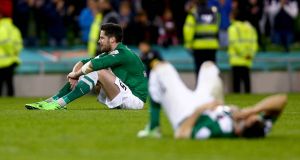 PFAI chairman Stephen McGuinness said he expected more to be added over the coming weeks.

Brothers Billy and Darren Dennehy as well as Ross Gaynor, all of whom started for City at the Aviva Stadium on Sunday, are all included along with a small but significant number of players with league winner’s medal from clubs around the country.

“This is the reality of our league,” McGuinness said. “There are over 100 players on the list out of 275 professionals here and the number will grow over the coming weeks as players who are in talks with their current managers about staying where they are find that the deal doesn’t get done.

“We put out the list after the cup final because we have to wait for it to be played; otherwise you’re listing players who are still preparing to play in the final which wouldn’t be on really.

“A few of the Cork lads are there at the moment, and there might be a few more as well as one or two from Dundalk because there are still lads from both clubs talking to their managers.

“We’ll probably have a more accurate idea of where things are in a couple of weeks time.”

As things stand, a club could put together quite a squad from those included with the likes of Brendan Clarke, Ian Bermingham and James Chambers, all ostensibly finishing up with St Patrick’s Athletic, joined by Sligo’s Gavin Peers, well regarded Drogheda goalkeeper Micheál Schlingermann and Max Blanchard of Shamrock Rovers amongst many others.

Gaynor, to be fair, certainly sounded like he anticipated being at City for another year when he spoke after Sunday’s cup final.

“Hopefully we can change our ways next year and play a bit more football because the work rate is there, the attitude is there,” said the left back of his hopes for the club next season.

Gaynor, who is from Co Louth, went on to suggest that he would be staying in the south for the close season.

“I’m not going home for a month,” he said with a laugh. “I’m staying in Cork. I’m not going home, no chance. I had to buy 80 tickets for all the bloody Dundalk heads in Ardee. I still haven’t got the money yet.”

For many of the rest of the league’s out-of-contract players there will be the annual round of putting out feelers, waiting for a call or word on the grapevine and then meeting managers in the hope of hammering out a deal.

“At other clubs, though, there’s really no major progress at all. I mean, it seems incredible that even four or five players can’t be identified as the core of the squad and signed.

“People ask why clubs don’t build more on what they’ve done in a particular season, but how can you build when you’ve no idea who is going to be there from one year to the next?

“A lot of the players do end up being signed back in the end but they have to wait and for the rest it’s a bit of a merry-go-round.

“The Red Cow is supposed to be the place it all happens. You hear mad stories of managers sitting in different corners and players going between them . . . or worse, a player arriving in to see their manager from last year leaving with a lad who plays his position.”