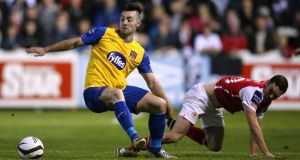 Daryl Kavanagh was inspired for the hosts, driving them on from the off and grabbing a tremendous second goal but his team-mates grew into the contest all around him as the Dubliners dominated the latter stages, though their opponents played with 10 men following the dismissal of Stephen O’Donnell.

With five games to play, the three points earned at the expense of their closest rivals may not be quite decisive but Stephen Kenny’s side must now play catch-up.

“Tonight’s game is over but that’s all,” insisted Liam Buckley afterwards. “We need to push on from that and make sure we keep our feet on the ground. It’s only three points and we have to beware of Sligo too.”

Momentum
The St Patrick’s boss said he had been surprised by the suggestion in the days leading up to the game it was Dundalk who came into it with momentum behind them.

“We’ve had momentum too, we’ve been top of the table for three months and the lads weren’t going to let that go easily, I’m glad they showed that out there tonight.”.

It was actually Dundalk who had made the brighter start but the home side got a foothold in the game thanks in no small part to Kavanagh, comfortably the liveliest of the home side’s midfield four.

They were at the heart of the battle and Chris Forrester was to get the opener, with John Russell also in the thick of things against Richie Towell, O’Donnell and, after John Mountney shifted out to the right, John Dillon.

It was uncompromising stuff at times with the visitors, in particular, chucking themselves into challenges but it was compelling too.

Dundalk really stretched their opponents, with Mountney and Towell running beyond their lone central striker, Pat Hoban, at every opportunity, while Kurtis Byrne occupied an advanced position out wide on the left.

However, their final ball let them down too often, at least until Mountney fed Hoban from the right a minute before the break and forward hooked a perfect ball over the top for Towel, who shot tamely straight at Brendan Clarke.

Knocked back
Kenny’s men hit the ground running again after the break, with Towell firing narrowly wide but his side were knocked back dramatically moments later when Killian Brennan, having settled more effectively into his role in front of the back four, fed Ger O’Brien, whose pinpoint cross towards the far post was headed, unchallenged, past a wrong-footed Peter Cherrie.

Dundalk needed to react but simply couldn’t. In midfield, it seemed, the tide had turned firmly against them, with the home side’s extra body seeming to count for more as the two teams tired and space became harder to close down.

The second goal was even better than the first, with Anto Flood flicking on a throw for Conan Byrne, who moved cross field before releasing Kavanagh down the left-hand side of the box, from where he buried the ball with his second touch.

With 28 minutes in which to salvage something, Kenny sought to shake things up by bringing on Vinny Faherty and John Sullivan, but the locals’ grip on things steadily tightened. Their back four were only occasionally seriously threatened in the spell that followed.