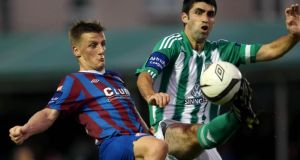 Anto Flood of Pat’s with Danny O’Connor of Bray at the Carlisle Grounds. Photograph: Donall Farmer/Inpho

Bray Wanderers 0 St Patrick’s Athletic 3: With the league leaders safely into the quarter-finals, the talk can safely start now about this being their cup year. The title race might prove a distraction, of course, but three more encounters like last night’s and Liam Buckley’s men could end more than half a century of misery and mishap in the country’s second most prestigious competition without ever having to come out of second gear.

There were spells in this game when they barely managed even that but Greg Bolger ensured that they led at the break thanks to a close-range effort that followed a poorly defended corner and Conan Byrne doubled his side’s lead on the hour before Killian Brennan wrapped things up with what some of the locals seemed to reckon was a controversial penalty.

For their part, Bray must wonder how they allowed their own interest for this season to be ended quite so tamely. They made the brighter start of the two sides and generated easily as many chances on goal and yet somehow they let the Dubliners cruise through with the goals, all soft, and conceded at key moments, effectively handing the game on a plate to their opponents.

Kieran Marty Waters looked comfortably their most lively player for the bulk of the evening and the best on the pitch for spells and he caused the St Patrick’s back four a fair few problems. Jason Byrne seemed a little off the pace again, though, and fluffed his best chances while Gary Dempsey popped up in promising positions to go close more than once but couldn’t quite produce the finish required to find the target.

For Liam Buckley the entire affair was something of a gift. He had started with his strongest side but must have been relieved to have seen them go relatively untested given the challenges to come in the league.

Really stretched
The first half was open, largely lacking in quality and slightly edged by the hosts but his side only occasionally looked really stretched by a side who struggled to make the pace they possess out wide count for much.

They came close once or twice, with their best moves involving John Mulroy, Byrne and Waters but the latter’s attempt to find Mulroy again with a low-angled cross was cut out at the vital moment while a Byrne rashly tried to finish with a flick a little while later when turning and shooting might have proven more fruitful.

By that stage, though, Wanderers had fallen behind with Brennan’s corner from the right reaching Byrne whose initial shot deflected kindly for Bolger on the edge of the six yard box. Maher wasn’t far off making it 2-0 before the break when he fired Ger O’Brien’s cross just over but when Byrne produced an assured finish after brushing off Dave Webster’s cross on the hour the home support must have realised the game was up.

Victory was sealed
Within four minutes the victory was sealed from the spot after Christy Fagan had been put through down the left and then bundled over seconds after attempting to nick the ball between the last defender and his goalkeeper.

The strike, as it happens, didn’t even have the power to reach the goal line but Brennan’s penalty was a different story with the midfielder driving it high to Clarke’s right.

With little left to prove, the visitors seemed to turn their minds towards next week and the league game against Bohemians who had to work a good deal harder to win here a few weeks back. Buckley got to give a useful run out to Shane McFaul and Daryl Kavanagh came on too to make his 50th appearance for the club. Both looked tidy in a side that was, by now, in far more efficient control of the midfield.

Late on, when they were chasing things, there were further opportunities from set-pieces for the hosts and Brendan Clarke was forced into a few solid though hardly spectacular saves.

Any vague hope that the home side even might put some sort of gloss on the scoreline evaporated when Ismahil Akinade pounced on a wayward backpass but then somehow poked the ball wide.