Sligo Rovers end their league campaign on a winning note 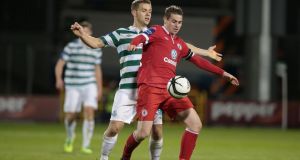 Sligo Rovers finished their league campaign on a high following their deserved 2-1 victory over Shamrock Rovers at Tallaght Stadium.

The home side fashioned the first chance of the night in the sixth minute as Thomas Stewart released Ronan Finn in the inside-right channel but the latter’s low shot was palmed away to safety by Ciaran Kelly.

The visitors highlighted their own attacking threat three minutes later as Raffaele Cretaro raced clear down the right wing but his superb low delivery was somehow missed by Aaron Greene with the goal at his mercy.

The hosts took the lead in the 26th minute when Finn fed Stewart down the middle and although Evan McMillan briefly cleared the danger, the ball fell invitingly to Shane Robinson who curled a superb finish inside Kelly’s left-hand upright from 20 yards.

The lead only lasted five minutes however as Kieran Djilali played a sublime through ball into the path of Greene, who atoned for his earlier miss with a fine finish beyond Brush from 16 yards.

The hosts
The chances continued to be created and it was the hosts who looked more likely approaching the interval as Shane Robinson erred in stabbing the ball straight at Kelly in the 41st minute after Finn had directed a Sean O’Connor cross into his path.

The second half lacked fluency but from one moment of inspiration in the 71st minute, Djilali raced clear down the right wing and his inviting cross was confidently despatched to the net by substitute Danny North.

The hosts introduced both Billy Dennehy and Eamon Zayed but the closest they came to restoring parity was a late Gary McCabe shot that was deflected narrowly wide.

1 Six Nations: Ireland are contenders but England still the team to beat
2 Mike Catt hopes to have Irish backs purring in Six Nations
3 Communication is key for new FAI president Gerry McAnaney
4 Owen Doyle: Creeping professionalism of schools rugby a threat to the game
5 The world spins but it’s soon back to Dublin and Kerry
Real news has value SUBSCRIBE