President’s Cup to give taste of things to come 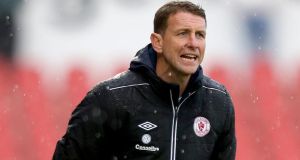 It’s odd, of course, that it took them so long to come up with the notion of kicking things off with a game between the winners of the previous season’s league and cup but, now that they have, the early opportunity to see how two of this year’s likely contenders will shape up against each other is an attractive prospect.

New players
Both have new players to size up and Sligo, in particular, might just have a point to prove after losing both league games in Inchicore last season when a win in one would have meant a different winner.

Like Liam Buckley, Ian Baraclough believes the new fixture will be a useful one for his side but dismisses any idea that victory might provide any psychological advantage for one side or the other.

“No,” said the Rovers boss at yesterday’s official launch of the new SSE Airtricity League season, “I don’t think so because we’re not going to play St Pats until the 11th week so I think that for both myself and Liam it’s like a really good preseason friendly but one to be treated with respect. It’s a good way to finish preseason and then we move into the really serious stuff.”

Baraclough is without Gavin Peers, who is targeting a mid-summer return, and Kieran Djilali, who is far closer to recovering from his knee problem and Rovers could hand starts to close season arrivals Eric Odhiambo, Paul O’Conor and Sean Maguire.

Buckley’s more extensive overall of his title winning side, some of it enforced, means there will be various points of interest in his selection too, not least Keith Fahey’s performance in midfield and Mark Quigley’s up front, if he’s deemed fit enough to start .

Tomorrow’s game will provide another early indication of whether he is right.