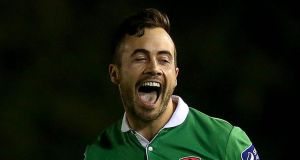 Ross Gaynor grabbed a 96th minute equaliser to get Cork City a point away at Sligo Rovers. Photograph: INPHO/Dan Sheridan

Cork City boss John Caulfield admits he thought his side were beaten before their dramatic injury-time equaliser in Sligo on Saturday.

Winger Ross Gaynor came off the bench to score a last-gasp leveller in the sixth minute of added time to deny his former side an opening night win.

Referee Robert Rogers left the field to a chorus of boos from the home fans, with the goal arriving 50 seconds after the signalled five minutes of injury-time had passed.

But Caulfield paid tribute to his side’s perseverance.

“It was a funny type of game. With the wind and rain we were trying to contain Sligo but we actually ended up playing really well in the first half. We hit the crossbar and created three chances.

“But, to be fair to Sligo, they came out in the second half and tore into the match. And they played some really good football.

“When they scored with five minutes left, you’re thinking that’s it, but my lads never gave up and showed great character to create the chance and get the equaliser.”

The strong wind and persistent rain was the standout feature of a dour first half, with Cork opting to go long to lone striker Mark O’Sullivan when in possession.

They did create the half’s best chance on the stroke of half-time, however, when Colin Healy’s cross bounced kindly for Alan Bennett, who smashed a close range effort off the crossbar.

David Cawley twice forced saves from Cork keeper Mark McNulty in the opening period, but the home side were much improved after the restart and dominated for large parts despite losing goalkeeper Richard Brush and striker Morten Nielsen to injury.

They found a breakthrough with 85 minutes on the clock, as the Cork defence failed to deal with Keith Ward’s corner from the right, and the ball bounced to Rovers debutant Steven Beattie, who forced it over the line with a little assistance from Gavin Peers.

Cork pushed forward in search of a response, with Gaynor and Kieran Djilali summoned the bench in an effort to break down their former side.

Cork were almost caught on the counter by Beattie for a second, but survived that to create the final chance for Gaynor, which he took at the second time of asking following a fine save initially from Rovers replacement keeper Ryan Coulter.

Rovers boss Owen Heary said: “They put up five minutes of injury-time and we thought we had seen it out, but then there was another two minutes, which was very disappointing. But we still need to defend, right to the 97th minute or whatever it is.

“We had a little lapse in concentration that cost us, because I thought we did well defensively.

“But there are plenty of positives for us. We played well in difficult conditions, got the ball down and tried to play. We got a goal from a setpiece as well which is good, but unfortunately we couldn’t see it out.”