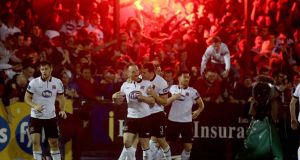 Well, well, well, reports that Dundalk might have blown the league turned out to be greatly exaggerated. Instead, Stephen Kenny’s men won it in some style, completing a hat-trick of wins over their closest rivals in front a full house at Oriel Park that had not staged a night like this for an awful long time.

City, to their credit, made a match of it, but as they had been for most of this season and all of their encounters with last night’s hosts, they were simply second best and goals after the break from Stephen O’Donnell, who started for the first time since April, and defender Brian Gartland were enough to hand the home side the victory they needed and the 10th title they craved.

It started frantically with City making it clear from pretty much the opening second or two that they were not going to allow their hosts to play their own game and Dundalk over the minutes that followed looking to up the pace so they could do just that. The result was often a little scrappy early on but it was certainly exciting.

As might have been expected, the locals had more of the ball but they struggled to put it to good use with City pressing them high up the pitch where Kenny’s men occasionally fell back on long balls towards Pat Hoban, more often on pushing it out wide with Daryl Horgan or Darren Meenan, the latter of whom had a hard time getting to grips with the occasion.

Cork’s energy served to keep things even but they showed their composure on the ball too at times with Gearoid Morrissey, back from injury, controlling beautifully at one stage to set up a chance for Billy Dennehy and Colin Healy starting a sweeping counter-attack that ended with John O’Flynn playing a terrific low angled cross that Mark O’Sullivan’s touch took just wide.

Dennehy hit the post with a free to underline just how easily the locals might find themselves having to throw caution to the wind but as long as it stayed level, Dundalk retained a slight edge with Horgan, Richie Towell, O’Donnell and left back Dane Massey all posing a threat at different times.

Hoban, meanwhile, was putting in quite a shift up front but his team-mates generally asked a bit too much of him when they tried to send him clear and Horgan, the team’s most potent looking force pushing forward with the ball at his feet, routinely seemed to run into blind alleys.

Dundalk, in fact, generally seemed at a loss over the course of the first half as to how they were going to break down a determined City defence but there were still chances, about the best of them falling to O’Donnell who twice fired over.

He did rather better just after the break when Cork thought they had cleared but Ruaidhri Higgins pushed the ball back towards Towell whose second touch was with his arm before his third set up his captain for a low-driven shot that squeezed between Mark McNulty and the foot of his post. The City players appealed for handball and while it had looked to be unintentional, Dundalk must have been relieved that Neil Doyle let it go.

Their supporters were ecstatic with the celebration that followed nearly raising the roof. Even after it finished, the mix of excitement and anticipation continued to mount, fuelled by the fact that the home side were starting to grow into the occasion, their nerves perhaps receding.

Their visitors, though, only needed a goal to be back in the championship driving seat and until the second they never looked at all out of it.

Their best opportunities in the period that followed came from set pieces as the locals conceded a steady trickle of frees but Healy’s two efforts were poor and easily blocked down while Dennehy fluffed one follow up, O’Sullivan another.

The introduction of John Kavanagh at right back gave them new impetus out wide and his brilliant cross eight minutes from time set fellow substitute Rob Lehane up for a header that flew just inches the wrong side of the far post. Almost from the kick-out, though, Dundalk won a free at the other end and with so many bodies in the box the pressure told; City simply couldn’t clear and after two attempted were blocked down, Gartland, just as he had for his winner at Turner’s Cross, poked home from six yards out.

Mayhem ensued as the certainty of a Dundalk win hit home. Cork, to their credit, pressed on and Healy sent a volley narrowly wide but as they committed themselves the space inevitably opened up behind them and so the hosts looked at least as likely to score again.

They’d enough, though. After a wait of 19 years, Dundalk were champions again.