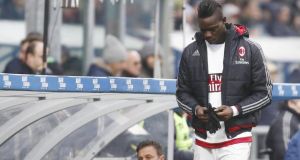 He told us things would be different. He told us he had changed his ways. Mario Balotelli told us all the words he thought we might want to hear as he rejoined Milan on loan this summer. “I’ve learned from my mistakes,” he said. “I’ll give everything.” At one point, he even informed Gazzetta dello Sport that: “I used to be a boy named Mario, but now I’m Mario the man.”

If he sounded like a spurned lover trying to win back a lost partner’s approval, then perhaps that’s exactly what he was. Balotelli had adored Milan since he was a child, and was not the first to frame their relationship in romantic terms. Adriano Galliani announced the striker’s imminent return last August by telling reporters: “some loves never end.”

The Rossoneri’s chief executive is notorious for his willingness to rekindle old affairs. Such players as Andriy Shevchenko, Ruud Gullit, Kaká and Roberto Donadoni have departed the club under his stewardship, only to return later in their careers. None have ever recaptured anything like their best form during their second stints with the team.

So why bother with Balotelli? He had never sparkled as brightly as the aforementioned stars in the first instance. His strike rate for Milan was robust – with 26 goals scored in 43 league appearances – and yet he had faded following a brilliant initial six-month spell. It was Balotelli who salvaged a third-place finish for Milan after joining in January 2013, but he too who collected 10 yellow cards and one red while cutting a tetchy and isolated figure during the ensuing campaign.

Since then, he had endured a dismal year at Liverpool - scoring only a single Premier League goal and falling behind Rickie Lambert in the pecking order. Milan fans were not exactly agitating for his return. In fact, there were whistles at San Siro when Balotelli’s name was announced among the substitutes for the home opener against Empoli.

But there was some method to Galliani’s madness. Balotelli, unlike those previous high-profile returnees, was still in his mid-20s. Besides, this was only a loan with no fee attached. In effect, Milan were getting a risk-free trial of a player they had sold for £16m a year earlier, and whose best seasons could still lie ahead.

The club’s new manager, furthermore, had an existing relationship with Balotelli. Sinisa Mihajlovic had been an assistant at Inter back when the player was emerging from the Nerazzurri’s youth team. A private meeting was arranged between them before Milan signed off on the deal.

“You will need to be the first to arrive and the last to leave,” Mihajlovic was reported to have told Balotelli. “You must always give your all, otherwise I will make sure you find your suitcases waiting outside the gates of Milanello.”

Balotelli seemed to have taken that message on board. He put in a swashbuckling cameo off the bench during a derby defeat to Inter before marking his first start with a fine free-kick goal to open the scoring in a 3-2 win over Udinese.

Just when his star was in the ascendancy, though, he was sidelined by a sports hernia. The injury, which turned out to require an operation, took Balotelli out of action from September right through to mid-January.

When Balotelli returned, he discovered that he was no longer needed. After a difficult first half to the season, Mihajlovic had finally found an attacking partnership that worked, M’Baye Niang’s range and readiness to drift out and serve crosses from either flank making him the perfect foil to Carlos Bacca’s penalty-box prowling.

Milan went nine games without defeat, surging back into the race for European places. Where once Balotelli asked “Why always me?” now he was instead left to ponder “Why never me?” He averaged fewer than 13 minutes on the pitch in his first eight league games back from injury, and failed to record a single goal or assist.

Mihajlovic was unsympathetic to suggestions that Balotelli required more substantial opportunities to make an impact. “The number of minutes you have on the pitch do not matter,” said the manager. “You can be decisive even in five. He needs to show me that he has rage and desire.”

That final sentiment was the important one. Introduced for the dying moments of a 2-1 win over Genoa, Balotelli had been asked to lead the defensive effort from the front but never broke out of a jog. Only a late intervention from Milan’s athletic trainer, Antonio Bovenzi, kept a furious Mihajlovic from storming over to make an example of his striker at full-time.

And yet, after Niang damaged his ankle in a car accident last week, it was Balotelli to whom the manager turned. He was not necessarily the most obvious choice. Jérémy Ménez, Milan’s leading scorer in 2014-15, has spent most of this season recovering from a hernia of his own but started alongside Balotelli in the Coppa Italia semi-final second leg against Alessandria on Tuesday. The Frenchman hit a pair of goals during what became a 5-0 rout.

Balotelli grabbed one – just as he had done in the reverse fixture – but his performance again lacked dynamism or verve. Several newspapers identified him as the worst player in a red-and-black shirt.

Mihajlovic persisted, selecting Balotelli to start alongside Bacca in Sunday’s match away to Sassuolo. Unlike third-tier Alessandria, these opponents were strong enough to give Milan real concerns. Just six points behind the Rossoneri at kick-off, Sassuolo had won both home editions of this fixture since their promotion to the top-flight in 2013.

They would soon make it three out of three. After taking the lead through a beautifully taken goal from Alfred Duncan in the 27th minute, Sassuolo never looked at risk of getting pegged back. Nicola Sansone made the score 2-0 under controversial circumstances late on, his team-mate Davide Biondini fortunate not to have been penalized for a foul on Andrea Bertolacci in the buildup, but Milan’s legitimate complaints over that incident could not mask their own shortcomings in attack.

Balotelli and Bacca never looked in sync as a partnership, the former failing to occupy wide spaces and deliver crosses as Niang might. If the lack of cohesion was understandable, given the two players’ scant experience of playing together, then Balotelli’s indifferent body language and failure to impose himself on his own terms were harder to justify. He did not touch the ball once in Sassuolo’s penalty area, and was subbed off in the 55th minute.

His replacement, Ménez, did not fare much better. Mihajlovic claimed afterwards that neither player is yet at full fitness, but that argument is becoming harder to swallow. Almost two months have gone by since Balotelli made his first post-injury appearance, against Fiorentina. This was the first league match he had started since then, and also the first one Milan have lost.

We cannot blame his struggles on extra-curricular distractions. With the exception of one crude gesture made towards Napoli supporters who gathered outside Milan’s hotel to abuse him last month, Balotelli’s behaviour has been beyond reproach. He has kept his head down, stayed out of the gossip columns and adhered diligently to clauses Milan inserted into his contract governing conduct, social media use and even personal grooming.

But the cold truth is that he has achieved little on the pitch so far to convince Milan that this relationship was worth reviving. He has only 10 games left in which to do so, and is unlikely to play in all of those unless his performances sharpen up swiftly.

Balotelli may feel frustrated by the timing of his hernia, which cost him momentum at a time when the picture was beginning to look a little more positive. He would not be the first lonely heart, though, to discover that the success or failure of any love affair can come down to a matter of timing.