It was arguably Brazil’s most painful defeat, when in front of over 200,000 fans in the Maracanã in Rio, they lost 2-1 to neighbours Uruguay in the final match of the 1950 World Cup 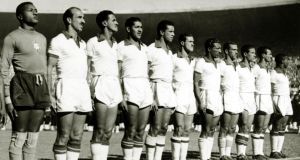 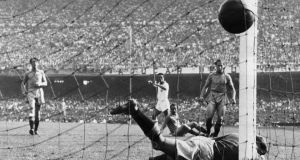 It was Zico, of all people, who turned to the elephant in the room and not only acknowledged it, but spread before it a sumptuous array of grass, leaves and wild fruits to help it grow bigger and stronger. “I would prefer to meet Argentina in the final. Not Uruguay,” he told last month’s Estado de São Paulo. “I think Uruguay could be the only team who could psychologically shake the Brazilian team.”

Oh Zico! In one respect the comments were an accolade, suggesting the current inexperienced crop of Seleção are tough enough to withstand just about anything this summer. In another they point not only to Brazil’s enduring trauma, 64 years later, at the World Cup final defeat to their tiny neighbours the last time they hosted this tournament, but also to the pressures that come with being not just favourites and hosts, but Brazilian favourites and hosts – with its expectations and assumptions, its desperation and its history. Home support at World Cups may be worth a fabled extra man, but Brazil’s may yet bring with him a banana skin or some thumb-tacks.

The national distress brought about by the amazing events of July 16th, 1950, was so widespread and profound – inspiring poets and writers, filmmakers and philosophers – that it implies a wider complicity outside those who failed on the pitch.

“When the players needed the Maracanã the most, the Maracanã was silent. You can’t entrust yourself to a football stadium,” the musician Chico Buarque observed of the crowd’s paralysed response to the horrors unfolding, although any carving up of the blame is a complex business best left to those affected. What can certainly be said is that the impact of the occasion, or at least its myth-making capacity, cannot be overstated.

“Of all the historical examples of national crises,” wrote Paulo Perdigão in Anatomia de uma Derrota (Anatomy of a Defeat), his 1986 meditation on the final and its aftermath, “the World Cup of 1950 is the most beautiful and most glorified. It is a Waterloo of the tropics and its history our Götterdämmerung. The defeat transformed a normal fact into an exceptional narrative: it is a fabulous myth that has been preserved and even grown in the public imagination.” It was, said playwright Nelson Rodrigues, “an irremediable national catastrophe . . . our Hiroshima”.

Brazil’s challenge for its first World Cup title, in the first competition held since 1938, had come on the back of the best-laid plans. After 15 years of dictatorship in Getúlio Vargas’s “Estado Nôvo” (“New State”) rule, the country had returned to liberal democracy in 1946, hoping to finally assert its multi-ethnic identity and find its place in the world.

Awarded the tournament in 1947, it did what any emerging nation does: it thought big. The renowned Brazilian sports journalist Mário Filho suggested that a great stadium in Rio would help provide the country with a new soul, awaken “the slumbering giant of Brazilian potential”, and be “a gift from this generation to the next”. The Maracanã, a soaring concrete ellipse with an official capacity of over 160,000, had the bulk and majesty to match the aspirations and rhetoric when its construction was finally deemed finished just as the finals began.

Brazil insisted on a strange format that would yield more revenue and thus help pay for its gleaming new stadium: four groups of four, with the winners to go through to a final group. However, the late withdrawal of three teams made it a lopsided affair: two groups of four, one of three, and just Uruguay and Bolivia in the fourth group. The Brazilians, who had prepared long and hard in camp, were quickly rewarded with a 4-0 thumping of Mexico after the release of 5,000 pigeons, a fireworks display and a 21-gun salute had quietly ushered in the tournament.

No one seemed to notice the Korean War was about to break out.

But Brazil were soon brought back down to earth, drawing 2-2 with Switzerland in São Paulo, a result which so enraged fans back in Rio that, in a comical case of mistaken identity, it is said they attacked the Swedish embassy. A nerve-racking win over Yugoslavia in the third game sent the hosts through to the next phase and seemed to liberate them. They hammered Sweden 7-1 and then turned over Spain 6-1 at the Maracanã. When Chico scored the fourth goal 152,000 people celebrated in song with a jaunty rendition of Touradas em Madri (Bullfights in Madrid).

I went to the bullfights in Madrid

And I almost didn’t come back

The final group match against Uruguay was a de facto final and Brazil needed only a draw to clinch the title. Everyone knew they would win. The Uruguayans had not impressed. But their recent record against Brazil was good enough for Flávio Costa, Brazil’s coach, to warn against complacency: “The Uruguayan team has always disturbed the slumbers of Brazilian footballers.”

His desire to ease the pressure was understandable. Local elections had been taking place in Rio and politicians were swarming all over the players. On the day of the game an early edition of O Mundo declared: “These are the world champions.” In the Maracanã, in front of a world record 173,850 paying customers – said to have climbed above 200,000 when press and guests were counted – the mayor of Rio made a ridiculous speech on the loudspeaker: “You Brazilians, whom I consider victors of the tournament . . . you players who in less than a few hours will be acclaimed champions by millions of your compatriots . . . you who are superior to every other competitor . . . you whom I already salute as conquerers . . .”

The grandeur of the occasion and the tragedy of the game are perhaps best understood by a romanticised 23-minute film – Paradise Lost – by Paulo Perdigão, now on YouTube. You must watch it: it is beautiful. Women in elegant swimsuits link arms and stroll along a Rio boardwalk. Gleaming cars and buses traverse the city. The extraordinary, heavy bowl of the Maracanã is set like a spaceship in scrubland.

The Brazilian players, all in white – after this game the cursed colours would be retired – emerge from the tunnel in the floor of the stadium like dutiful men coming from the cellar of a bar. The crowd is electric!

Six happy women have picked a letter each for the front of their snug sweaters: B-R-A-S-I-L. It is easy to read stiffness and nervousness in the players now, and notice that Uruguay’s captain-general Obdulio Varela, as if foreseeing the guilt he will later feel, does not make eye-contact during the handshake. Balloons released! Handkerchiefs thrown in air! Birds freed from cages! Kick-off.

As Alex Bellos points out in his tremendous Futebol: The Brazilian Way of Life, the scoreless first half produced a moment that would later enter mass production in the myth factory: Varela struck Bigode, Brazil’s left-half. Was this when the psychological tide turned? Bigode would be crucified for it. Nevertheless Brazil landed the first official blow a minute into the second half when Friaça broke through, beating goalkeeper Máspoli with a bobbling cross-shot from the right.

The delirium that swept the stadium lasted less than 20 minutes. Uruguay’s moustachioed, skinny winger Ghiggia swayed past Bigode on the right and crossed for Schiaffino to strike first time into the top corner. Around the Maracanã mouths opened soundlessly. Handsome faces strained. Terrified players reeled.

In the 79th minute Ghiggia completed the job. After a one-two that cut out Bigode, the winger bore down on goal and struck the great heavy orb under Barbosa at the near post in what is nowadays called a goalkeeper’s mistake.

The footage of this moment is extraordinary: for several seconds the camera cannot locate the ball in the net until finally, brutally, it appears in the corner – Exhibit A. To Barbosa’s biographer, “the black-and-white film is Brazil’s Zapruder footage”, writes Bellos.

In the city of Bauru in São Paulo state where he grew up, 10-year-old Pele saw his father cry for the first time. In Pau Grande, a small town in Rio de Janeiro state, 16-year-old Garrincha went fishing instead of listening to the game on loudspeakers in the town square, only to find the place in tears on his return.

The Brazilian team did not recover and neither did the nation. The team’s three black players – Barbosa, Bigode and Juvenal – were landed with the blame in a racist re-examining of the country’s ethnic makeup.

As David Goldblatt writes in Futebol Nation: “Footballers in general, and black footballers in particular, were cast as psychologically dysfunctional and over-emotional, lacking the self-discipline required to perform at their best.”

Barbosa’s life was ruined. He later spoke of walking into a shop to find a woman saying to her son: “Look, there is the man who made all Brazil cry.” A final insult came before his death in poverty when he was turned away from the 1994 Brazil squad’s training camp for fear he would transmit a curse.

Around the world, the events of July 16th, 1950 – the maracanazo or Maracanã disaster – made ripples rather than waves. In the sports pages of The Irish Times barely four paragraphs flesh out a headline that is as insensitive to Brazil’s pain as it is stark: “URUGUAY WIN WORLD CUP”. Underneath, there is better news for South Tipperary Gun Club: “GOOD SHOOTING AT CLONMEL.”

1 Golf in Level 5 Covid restrictions: Clubs still waiting to hear if they can remain open
2 Hugo Keenan could start in changed Ireland team against Italy
3 Man United’s latest Parisian party more impressive than heist of 2019
4 Gordon D’Arcy: Ireland don’t need to do a Finn Russell on it
5 All-Ireland Under-20 football final postponed due to Level 5 Covid-19 restrictions
Real news has value SUBSCRIBE
Crossword Get access to over 6,000 interactive crosswords