Tony Cascarino on Italia 90: ‘We ate far too much chocolate’

‘Jack Charlton treated us like men. But it got to stage where we asked him not to let us out’ 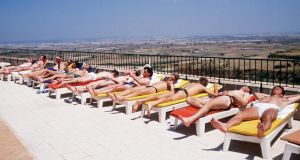 Spot the Irish man: the Republic of Ireland team do a bit of sun-bathing before the start of World Cup finals in Italy. Photograph: Billy Stickland/Inpho 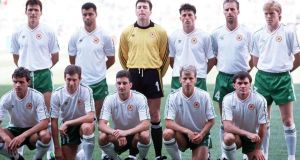 The Ireland team line up before their match against Egypt at the 1990 World Cup. Photograph: Billy Stickland/Inpho

“We all suffer from nostalgia and everything seems better looking back at it. I actually forget that the games were rubbish and I got dropped!”

Perhaps Tony Cascarino’s summary of Italia ’90 is the most revealing. Yes, success was achieved on the pitch but it certainly wasn’t the highest quality or most exciting football ever seen. And yet the whole experience will always be looked back on in a sort of golden haze by players and fans alike.

Cascarino has told stories and given his account of that magical summer in 1990 hundreds of times but you can still hear the excitement in his voice as he begins to reflect yet again.

“I’ve only got one photo of my football career in my house,” he says. “It’s a photo of the 1990 Irish team all lining up in the World Cup. ”

As he looks at it, he lists them off.

“It’s McGrath, McCarthy, Bonner, me, Staunton, Morris, Aldridge, Sheedy, Houghton, Andy [Townsend] and Moran. That’s the only photo I have in my house from which you’d know I played football.”

Whereas nowadays players will battle the mind-numbing boredom experienced at World Cups by playing as themselves on games consoles, interacting with fans through social media or listening to music on oversized headphones, methods of defeating that boredom were somewhat more imaginative at Italia ’90.

“Mick [Byrne, team physio] would hand out sleeping tablets and I’d be sitting next to Andy and we’d have a bet on who could stay up the longest after taking two Mogadons. So we’d both have to take it at the same time and the rules were that you had to be sitting up and we’d see who could stay up the longest. So I’d wake up three hours later and Andy would be sleeping in the most uncomfortable position trying to keep awake so we never knew who won because they knock you for six!”

Methods of boosting the players’ energy were also different, to say the least.

“We had all this chocolate everywhere. Everywhere we went we had Snickers and Mars bars in big boxes. We’d be saying to Mick Byrne ‘no Mick, no more Snickers’ and he’d be saying: ‘no, you need those for energy, they’ll give you energy!’ You’d eat about 12 Snickers in a day!”

The drinking culture within the Irish team at the time has been well-documented and went as far as the team consuming two kegs of Guinness between them the night before the quarter-final against Italy. That, according to Cascarino, was because Jack felt that they would be “going home the next day because we’re playing against the hosts and will get absolutely nothing!”

That story goes somewhat against Charlton’s famous remark on the team’s return to Dublin. “We had a little bit of sun. We ate well. And we drank very little,” was how the manager summed up the time in Italy.

According to Cascarino, things were different.

Perhaps the most interesting thing in talking to the former Marseille striker about his memories of that World Cup is the fact that it was also one of the times that he regrets most in his football career.

The phrase “to have too much of a good thing” comes to mind when Cascarino explains that the laid-back attitude and partying nature of the Irish team actually hindered his career.

It’s difficult to understand how such a laid-back attitude within the squad could reap the benefits that it did but Cascarino sums it up in one sentence.

“The main thing was that we were happy because Jack treated us like men.”

1 Shels chairman Andrew Doyle hits out at ‘appalling’ FAI governance
2 Heroic insanity: When Michael Dunlop raced home in memory of his father
3 Players focus more on life outside game due to lockdown, says GPA
4 Rams pip Chiefs in third-highest scoring game in NFL history
5 Perec has to retire as injury persists
Real news has value SUBSCRIBE
Crossword Get access to over 6,000 interactive crosswords