Robbie Keane confident he is winning his fitness battle 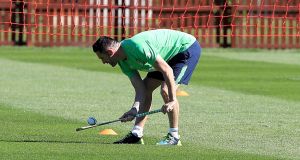 Robbie Keane expects to be available for at least two of Ireland’s group matches at the European Championships in France.

“I thought it was going to be a lot longer,” says the 35 year-old. “They are saying a couple of weeks, which would obviously get me fit for the Sweden game, or maybe if I miss that one, I’ll definitely be ready for the second game, so it’s bad news, but it could have been a lot worse.”

The Irish skipper continues to receive attention for the problem which he picked up in training on Saturday. He was joined on the treatment table yesterday by Jon Walters who skipped training after initially arriving for it at Fota Island with a similar but less serious problem. The Stoke player spent some of the session in the gym and worked for the rest of it with one of the physios.

But the Dubliner will have to make steady progress along the lines of the timeframe he suggests if the possibility of replacing him is not to be raised again in the build-up to the team’s opening game.

In the meantime, he says, the preparations have been going well overall with the players enjoying their time this week in Cork and looking forward to the tournament.

“It’s been brilliant, I have to say,” he says. “We are very, very lucky here, to be honest with you, with the lads that we have and the spirit that we have in the group, which has always been the same since I have been involved with the Irish team.

“It [the tournament] is certainly something that I’m looking forward to. I’ve been involved in a couple before, but there seems to be a great togetherness between everybody, not just the players, but the coaching staff, the backroom staff and everybody.”

He’s not the only one to have experienced a big tournament before and for the second European Championships in a row, the Republic of Ireland will have the oldest squad at the competition, something that may, to some extent, be already contributing to the concerns on the fitness front.

With tickets for Ireland’s games, particularly the one against Belgium in Bordeaux in Saturday, June 18th, still hugely sought after, support for the team will be amongst the competition’s largest to.

And Keane makes it clear that he and his fellow players value the backing they get.

“When I was a kid growing up –- 1988, ’90, ’94 – it was the same thing. It hasn’t changed and it’s full credit to the Irish fans because it’s not easy for fans to get up and go away for a few weeks with the recession a few years ago. It’s tough times for people to get the money and to travel, it’s expensive, it’s not cheap for them. So to do that, I am telling you right now, the lads are very, very grateful for that. We genuinely appreciate the support and we are certainly looking forward to it now.”

Martin O’Neill and Roy Keane, meanwhile, were interviewed on Today FM, with the manager aiming the odd good -natured jibe at his assistant over the manner of his departure from the World Cup in 2002.

“I’ll tell you how much hope we had [when Northern Ireland went to Spain for the 1982 World Cup] the association didn’t book a hotel for the second stage, never mind no bloody bibs arriving. It’s interesting the comparison...Imagine fouling up because there are no bibs, we had no hotel to go to! We were sleeping with the homeless in Madrid but we got on with it.”

As he often does, the Ulster man paid tribute to Brian Clough over the course of the conversation but he also acknowledged that managers were generally as good as the players available to them.

“As a young manager at Leicester,” he said, “we played in Anfield and after the game was over, I went into the old bootroom and I was speaking to one of their coaches, Ronnie Moran, a famous coach.

“I remember him saying ‘there’s no secrets in football’ and it struck home with myself and John Robertson. We were glad to hear that even, with this phenomenal team, someone at Liverpool was saying this.

“Alex Ferguson was a phenomenal manager but I did say to him once that it must have been nice to walk into the dressing room at 2.45 in the afternoon and look around and see Schmeichel, see him (Keane), not such a great sight; seeing Scholes, Giggs, van Nistelrooy and thinking: ‘I think we might beat Luton today’.