Marko Arnautovic brace keeps Wales to a point in Vienna 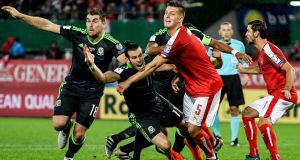 For Wales it was a point that could have been three and also came at a cost, yet once the dust settles and Chris Coleman and his players clear their heads, they may well come to view this as a valuable result. The frustration for Wales is that they led on two occasions and conceded the softest of goals to allow Austria back into the game for a second time only three minutes into the second half.

This was one of those nights when Marko Arnautovic was in the mood and the winger capitalised on a mix-up between Joe Allen and James Chester to score his second goal of the match. The sight of Allen limping off shortly afterwards was every bit as distressing for Wales and it seems highly unlikely that the Stoke midfielder will recover in time to face Georgia at home on Sunday.

Allen, with his third goal in as many games for club and country, had opened the scoring in the first half with a splendid strike from just outside the area. Yet Arnautovic quickly levelled after Chris Gunter switched off and once again an intriguing game hung in the balance.

When Kevin Wimmer, who has yet to feature for Tottenham Hotspur in the Premier League this season, put through his own net in first-half injury time it made you wonder whether Marcel Koller, the Austria coach, had tempted to fate with his pre-match comments about Wales being a “lucky” team. Yet any notion of good fortune was absent when Austria equalised again through Arnautovic.

On paper this was Wales’s toughest assignment in their qualifying campaign and it was always going to be interesting to see how Coleman’s players would handle the occasion and the feverish atmosphere whipped up by the home support. Allen provided the best possible response when he put Wales ahead in the 22nd minute with a goal of the highest quality to continue his excellent form.

It was no surprise that Gareth Bale was involved in the build-up. Quiet in the early stages and a little careless in possession at times, the Real Madrid forward scampered clear on the left flank to get around the back of the Austria defence and deliver a vicious cross that Wimmer spooned up into the air with a poor clearance. Gunter headed down and Allen strode on to the ball before striking a glorious left-footed volley from 22 yards that flashed beyond goalkeeper Robert Almer and into the far corner.

Almer had earlier produced a brilliant one-handed save to keep out Bale’s header and at the other end Wimmer’s near-post effort was repelled by Wayne Hennessey in a lively opening period. Allen’s goal arrived after a slight lull and if there was one disappointment for Wales in the first half it was that they could only hold on to their lead for six minutes. David Alaba, the Bayern Munich left-back who plays in central midfield for his country, showed his class with a pitching wedge pass over the top of the Wales defence that picked out Arnautovic’s clever run. Darting in from the left, the Stoke winger got away from Gunter by running on the inside of the Wales right-back before stooping to head past Hennessey.

Buoyed by that goal, Austria enjoyed a little purple patch. Arnautovic teed up Zlatko Junuzovic for an 18-yard drive that Hennessey saved low to his right and two minutes later the Wales keeper had to be alert to prevent Ben Davies from turning the lively Florian Klein’s cut-back into his own net.

Almer was not so fortunate on the stroke of half-time. Bale’s long throw-in was flicked on by Sam Vokes and Chester met the ball on the full with a diving header that Almer blocked with his legs at point-blank range. Wimmer, however, had ended up on the floor after challenging Chester and the ball came back off Almer, struck Wimmer and rolled over the line.

Yet as with before, Wales were soon pegged back and it was an awful goal to concede so soon after the restart. Allen’s pass inside the Wales half put Chester under pressure, the central defender miscontrolled the ball and Arnautovic pounced, sprinting clear in the inside-left channel and opening up his body to expertly steer the ball into the far corner.

To compound things, Wales lost Allen to injury eight minutes later, leaving them looking light in midfield, where they were already missing the craft and guile of Aaron Ramsey. Dave Edwards was introduced and with Austria now enjoying much more possession, the question was whether Wales could hold out. Arnautovic, thrashing wildly at the ball on the right-hand side of the area, sensed a chance of a hat-trick but his shot was high and wide. Alessandro Schöpf was then denied by Hennessey as Wales remained resolute.

Serbia winger Dusan Tadic set up one goal and scored another as he inspired the Balkan nation to a 3-0 win away to Moldova in Chisinau.

Tadic netted the third goal just before the hour mark after creating the opener for fellow winger Filip Kostic in the 20th, with captain Branislav Ivanovic heading home the second goal after 37 minutes on a slick surface.

Slavoljub Muslin celebrated his first competitive win as Serbia coach with his team having been held to a 2-2 home draw by Ireland on his debut.

“The result will have restored the confidence that was lost after previous failures, but there is no reason whatsoever to get carried away,” said the 63-year old.

“I am happy with the commitment and the performance, hopefully the fans will turn up in numbers for our home game against Austria on Sunday.”

Serbia have failed to qualify for a major tournament since the 2010 World Cup in South Africa.