Manuel Neuer cleans up by being more than a sweeper 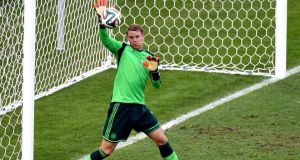 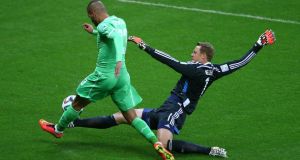 In second-half injury time during the France-Germany quarter-final last Friday, Karim Benzema broke free on the left of the German penalty area. My seat in the overflow press section was level with the 18-yard line at the far end, and everyone around me had to crane their necks to see the action. Benzema lashed in a shot and the ball bounced high away from the goal and back towards the play.

Everyone shouted things like “Ooof!” and “Aagh!” Had that ball come back off the bar? It looked like it had hit the bar. We waited for the replay on the stadium big screen. There are no TVs for replays in the Maracana’s overflow section. The journalists watching the game from there quite possibly see less of the action than people watching anywhere else in the world.

The replay came. The ball had not hit the bar. It had hit Manuel Neuer’s massive hand and bounced off it like it was the bar.

This was a rather impressive reminder that Neuer has some formidable basic goalkeeping attributes besides the sweeper skills that have been the talk of the World Cup.

“He’s exactly the kind of goalkeeper we want in our team,” Germany’s goalkeeping coach, the Euro 96 winner Andreas Köpke, told GQ in an interview. “He’s a great goalkeeper, but he can also participate in build-up play.”

Knowing that Neuer the sweeper can protect quite a lot of space behind the back four gives Germany the freedom to vary their tactical approach. Against France, Germany sat deep, and Neuer scarcely left his line. It was a complete contrast to the matches against Algeria and the USA, when Germany had tried to keep the opponents penned back in their own half. It was Neuer’s responsibility to guard the space behind that high defensive line, and his charges out of his area were crucial in snuffing out attempted counter-attacks.

This style of goalkeeping can be hard on the nerves. Nobody has lobbed Neuer yet, but he knows that every time he runs out of his goal he risks disaster: a missed challenge, a sliced clearance, maybe a red card.

A Schalke supporter all his life until he left them for Bayern in 2011, Neuer’s boyhood idol was Jens Lehmann, who had, he says, “the most modern goalkeeping style in Germany.”

There were times when Lehmann paid the price for that modern style. Arsenal’s Invincibles were knocked out of the Champions League by Chelsea partly thanks to a goal Eidur Gudjohnsen scored after beating Lehmann in a challenge well outside the area. When Lehmann finally did reach the Champions League final two years later, he was sent off after 18 minutes for running out of the box and bringing down Samuel Eto’o.

Neuer, too, has endured embarrassing moments. In his first league match for Bayern, he charged to the edge of the area and was beaten to the ball by Igor de Camargo of Borussia Moenchengladbach, whose looping header bounced into the empty net. Bayern lost 1-0. “My mistake led to the goal. I look stupid,” Neuer admitted.

Luckily Neuer is laden with a quality beloved of German football men: Nervenstärke. Literally meaning “Nervestrength”, it’s one of those German compound words that has no direct equivalent in English.

(It would be tempting to make some kind of penalty shootout-based joke about how unsurprising it is that German has a word for a quality of coolness under pressure that is lacking in English, except that the only reason English doesn’t have an equivalent word is that it doesn’t like compound words. English would have a word for Schadenfreude too if English allowed you to say things like “harmpleasure”).

Köpke was talking about Nervenstärke last week when trying to explain why Germany were good at penalties to a gathering of World Cup reporters. He has used this word a lot about Neuer: “This Nervenstärke is the quality that makes him stand out. If something goes wrong for him during the game, he can put it aside immediately. Analysis can wait.”

Neuer’s mental discipline is especially important now that he is the goalkeeper for Bayern and Germany – two of the most boring jobs in sport. Köpke explains: “When he played for Schalke, if he had a wobble, he’d be back in the action right away and he could quickly play his way through it. At Bayern, he might face the first shot on goal in the middle of the second half. It’s all about maintaining alertness, so you’re there when you’re needed.”

Now 28, Neuer has spent his life working diligently at every element of a craft that is generally taken more seriously in Germany than it is in England. The German respect for goalkeeping is illustrated by the fact that goalkeepers have won Germany’s Footballer of the Year award 10 times since it was first handed out in 1960. Neuer won it in 2011, joining his goalkeeping predecessors Hans Tilkowski, Sepp Maier, Harald Schumacher, Andreas Köpke and Oliver Kahn.

1 Jim McGuinness: There is a way to save championship and make it competitive
2 Sordid murder of hurling brothers still resonates in south Galway
3 Nicky English: Waterford and Galway's task made harder by third week syndrome
4 Jackie Tyrrell: What ever happened to Austin Gleeson?
5 Klopp furious as injuries mount and VAR decisions prove costly
Real news has value SUBSCRIBE
Crossword Get access to over 6,000 interactive crosswords