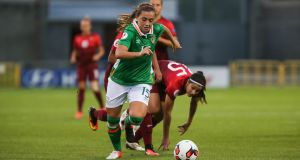 A brilliant goal from Arsenal’s Katie McCabe helped the Republic of Ireland women’s team beat Wales to take top place in Group C at the Cyprus Cup on Monday.

It was another solid performance from Colin Bell’s side, who have now kept three clean sheets at the tournament and never looked like conceding in a structured and determined performance.

The match-winning moment came with just 20 minutes on the clock as centre back Diane Caldwell picked out the run of McCabe with a fantastic 60-yard pass and the forward controlled with her left before smashing the ball high into the roof of the net.

Claire O’Riordan, who made her first international start came off at the break for Megan Connolly to ensure a defensive second-half in difficult conditions in Paralimni.

Connolly could have scored a second half-way through the second half when Stephanie Roche found her on the edge of the area but her effort was well saved as Ireland went on to defend the lead and win the game.

Bell was elated with the performance who has had an unbeaten start to his managerial reign with two wins and one draw.

Bell said: “It was another fantastic performance where the players have given everything for the cause and fought until the final seconds to get the win we deserved.

“In the second half, we had to keep things tight so we brought Megan in who was able to drop in and give Karen [Duggan] more of a chance to drop back and defend the way she did.

“Wales are difficult opponents, a really good team but they didn’t have one real chance in the second half which is testament to how well we played.

“We could have snatched a second at the end but I’m delighted for the team who are getting the rewards for their efforts.”

Ireland will now have to wait to find out which team is the best runner-up from Group A and Group B for their final game on Wednesday.

1 Born to ride, born to win: Sam Bennett, the making of a green machine
2 Leinster look ready to step things up and burn off Saracens challenge
3 Keith Duggan: Surreal story of John Delaney needs to act as a wake-up call for FAI
4 Will Connors now delivering on his massive potential
5 Michael Walker: Gareth Bale’s place in Real’s history a strange type of glory
Real news has value SUBSCRIBE
Crossword Get access to over 6,000 interactive crosswords