Italia 90: All has changed since the day the nation held its breath

Fans line the route for their returning heroes of Italia ’90. Most of the photographs were taken from a bus which accompanied the returning team as they made their way into the city from Dublin Airport

Greeting returning heroes: Lining the street to welcome back the Italia ’90 Ireland side. Photograph: Tony O’Shea

Dancing in the streets: Celebrating the success of the Ireland side in 1990. Photograph: Tony O’Shea

The hairstyles were bigger, but the people in Tony O’Shea’s 1990 photographs look smaller than the Irish of today. Or at least thinner, that being the era before Celtic tiger growth rates started to affect waistlines as well as GDP. Also, even allowing for the circumstances, and higher than usual levels of inebriation, the country looks like a wilder place than it is now.

In many ways it was. It was certainly more dangerous in all kinds of ways: from smoke-filled bars and workplaces to the terraces of football stadiums, where soccer fans still did Mexican waves with their feet, involuntarily, every time a goal was scored.

“Health and safety” had yet to become a joke term then. It was still an embryonic concept, reportedly to the concern of Jack Charlton and others as, from the upper-deck of an open-top bus, they surveyed the extraordinary throng below them in the streets of Dublin, celebrating the Republic of Ireland’s return from Italia ’90, and feared the worst.

Not that the bus was moving fast enough to put bystanders at risk. It took three hours to get from the airport to College Green in the city centre. The crowd along the way was estimated at half a million, although not by gardaí, who were overwhelmed by the calculations involved and left the guessing to the media.

Visitors to Dublin during the tournament, including the politicians and Eurocrats attending a summit in Dublin Castle on the day of the famous Genoa penalty shoot-out, expressed amusement at how unrestrained the celebrations were in relation to the team’s achievement. What, they wondered, would happen if Ireland actually won the World Cup?

As another generation of players and supporters, many of them not yet born back then, begin the attempt to create new legends today, it may be worth recalling that their predecessors didn’t even win a game at Italia ’90.

Moral victory (1-1) against England was followed by moral defeat (0-0) against Egypt, before we also drew (1-1) with Holland in a game where morals didn’t enter into it: the teams declaring a cessation of hostilities with 15 minutes left, rather than risk the result that suited both. 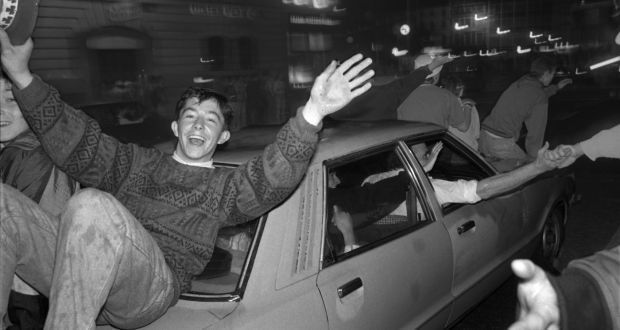 After that came a scoreless 120 minutes against Romania, a match now only remembered for the penalties: few of which, by the standards of the 2016 Champions League final, were well taken. And when, at the fifth and final attempt, Ireland at last managed to avoid a stalemate, it was in defeat – glorious, of course – against the host nation.

In a tournament that went down in football history as one of the worst ever, with a paltry 2.2 goals a game and 16 red cards, including one in the final, we somehow managed to depress both the scoring average at Italia ’90 and (probably, for any neutrals who could bring themselves to watch) the entertainment value.

A local newspaper summed up the England-Ireland game with a twist on the title of an old West End farce: “No football, please, we’re British.” Ireland were also complicit in a situation that provoked a ban on players passing the ball back to the goalkeeper: a game-killing tactic we had used to stultifying effect.

Still, if the football lacked all beauty, the 1990 World Cup at least had the best theme song of any tournament, thanks to Nessun Dorma.

For anyone with Latin blood, Luciano Pavarotti’s soaring chorus was sure to stir it. And as if to prove themselves the Mediterraneans of the north, the Irish were stirred more than most that summer, reacting to every melodramatic plot twist of the tournament like the audience of a Palermo opera house.

The emotional high point was the Genoa shoot-out, our response to which was most memorably expressed in the face of veteran journalist John Healy: a hard man who, watching it at the EU summit in Dublin, cried openly. But like true operas lovers, we also later revelled in the tragic denouement, when the evil Don Schillaci pounced in Act 5, to thrust home the dagger that ended our adventures.

Within seconds of the final whistle, where countries with higher expectations would have been downcast, Ireland was celebrating again, led – on the pitch in Rome – by taoiseach Charlie Haughey. It was no surprise that Schillaci became a kind of hero in Ireland, appearing later in TV ads. So much had we enjoyed the trauma he caused us, it was always a pleasure to be reminded.

But even if the Republic were to win the current tournament in France, it is hard to imagine the popular frenzy reaching 1990 levels again. As for glorious failures, partly as a result of 2002 when we were schooled by Roy Keane’s rage for excellence, we are not as easily pleased as we used to be.

We may also be a bit less suppressed than we were in 1988 and 1990, and so less in need of an excuse to open up to strangers. It was striking that last summer the streets around Dublin Castle saw a microcosm of those scenes, with mass flag-waving and even a small cavalcade: but in that case celebrating the result of the marriage referendum rather than a mere football tournament.

Although sport is now bigger business than ever, it is somehow not as vital to most people’s well-being as it was in the 1980s, when it seemed to be the only thing Ireland had going for it. That was already beginning to change by 1990. And in the years afterwards, it used to be argued, half seriously, that Ireland’s football exploits had sparked the economic miracle, or at least fanned the flames.

That is one reason why this year’s European Championships has as many teams as the 1990 World Cup did. More importantly, for good and bad, it helped to unleash the wave of foreign investment already heading to Ireland before Pavarotti cleared his throat. Emigration figures fell dramatically in the summer of 1990, after rising for several years and reaching record levels in 1989.

Another milestone of 1990, less noticed at the time but now considered epochal, was the first step towards what became the internet. This and the resultant democratisation of media may also have made outpourings such as Italia ’90 impossible to repeat.

Now, people can be part of mass audience reaction without leaving the privacy of their sitting rooms. And if Tony O’Shea were somehow shooting these photographs in 2016, many of his subjects would also be taking pictures of the event, or otherwise checking their phones.

3 Darragh Ó Sé: Galway’s defeat at the death to Monaghan is shocking and unforgivable