Argentinian newspaper claims Irish players were paid $10,000 not to injure Messi in 2010 friendly 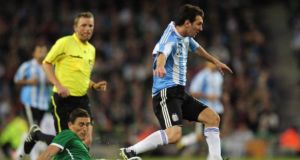 Ireland players have rubbished suggestions made in an Argentinian newspaper that they were paid $10,000 each in return for Lionel Messi emerging from 2010’s friendly game at the Aviva unscathed. Photograph: Getty

Irish players involved in the friendly game against Argentina nearly five years ago have dismissed as “absolute nonsense,” a story in which it is suggested they were paid a bonus of $10,000 each for Lionel Messi emerging from the game uninjured.

The allegation was made in the Argentinan newspaper La Nacion which appears to suggest that the game itself was an extension of the arrangement under which Fifa paid the FAI €5 million in the wake of the Thierry Henry handball storm. There has repeatedly been talk in the past that the international organisation played a part in securing a prestige friendly for the Irish association as part of the fallout of the controversy. A subsequent Brazil friendly that was announced a matter of days after the Stade de France fixture was generally deemed the most likely fixture.

The FAI denies that but in any case, the Argentina game, which was used by the association to mark the opening of the redeveloped stadium in August 2010, had been announced fully five months before the World Cup play-off in Paris and the FAI says it is consulting with its legal advisors with regard to the suggestion that it was linked in any way to Ireland’s elimination from the World Cup and all that followed.

A couple of the players that were involved in the game that night have, meanwhile, reacted with some astonishment to the allegation that they were all promised cash payments in the event that Messi came through the game unhurt.

“One hundred per cent, there’s nothing in that at all,” said Kevin Kilbane, who started the game. “Definitely nothing. Obviously there’s the whole issue of insurance around international football but I’ve never heard of anything like that before and there was no suggestion of it to any of the players, nothing whatsoever in the lead up to the game.”

The newspaper suggests that Barcelona, who played a preseason friendly game in China three days before the Dublin match, were reluctant to let Messi take part in the game and unhappy about the lack of adequate insurance cover for the player which, it is suggested, would have cost $5 million.

At this point, La Nacion reports, Julio Grondona, the controversial long term president of the Argentinean Football Association, former senior vice president of Fifa and the man, now deceased, blamed by the federation recently for authorising the transfer of $10 million from Fifa on behalf of the South African FA to accounts controlled by Jack Warner in 2007, suggested that it would be easier and cheaper simply to pay the Irish players not to tackle the star. The paper clearly suggests that this actually happened.

Reports on the game make reference to Messi generally getting past opponents without excessive difficulty but also to one crunching challenge from Richard Dunne (see clip above 3:18); all well within the realms of what might have been expected in normal circumstances.

“It’s absolute nonsense,” says Darren O’Dea, who was on the bench for the game. “I don’t have any idea where it’s come from but the players certainly didn’t get anything.

“I’ve never heard of anything like this,” he continued. “I’ve heard of some pretty weird things but nothing like this. There’s definitely nothing to it.”

Keith Andrews, also involved in the friendly which was settled by a single Angel Di Maria goal, said: “That’s just nonsense. It didn’t happen. I remember that game quite well and Messi was playing well within himself as you’d expect in a friendly at the start of the season.

“But it was still a proper game, one we wanted to win, and and there was no way we were given any instructions about taking it easy on anyone.”