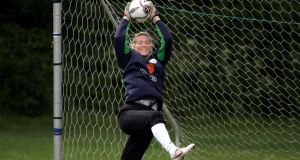 Ireland expect to have experienced goalkeeper Emma Byrne back for their world Cup qualifier against Slovakia at the Carlisle Grounds in Bray tomorrow. Photograph: Eric Luke

The Ireland women’s team kicks-off its World Cup qualifying campaign in Bray on Sunday (Carlisle Grounds, kick-off 1pm), where Sue Ronan’s side take on Slovakia ahead of a trip to meet Croatia on Thursday.

Given Ireland’s group also includes Germany and Russia, as well as Slovenia, and there is only one automatic qualifying spot plus play-offs for the second-placed teams, there is considerable pressure to make a good start to the campaign.

Ronan lost impressive young defender Louise Quinn to injury earlier this week but Arsenal goalkeeper Emma Byrne, who missed two club games recently following an accident, has come through the squad’s preparations without any problems and is expected to captain the team.

1 Cheltenham faces criticism after racegoers suffer Covid-19 symptoms
2 Ian O’Riordan: Learning to run for the first time all over again
3 Son Heung-min to carry out mandatory national service in South Korea
4 Karen Robinson Walton: I am looking at him. I say ‘Benjamin, what have we done?’
5 Pelé’s personal keepsakes to go under the hammer
Real news has value SUBSCRIBE
Crossword Get access to over 6,000 interactive crosswords