Ireland 1 Germany 0: Straight into the top five of Irish wins

Bulgaria in '87 to the Dunne show, Ireland have pulled some rabbits out of hats in qualifying 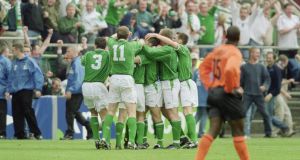 No, it wasn’t a dream. Yes, Shane Long did hammer the ball past Manuel Neuer into the top corner. And, yes, Ireland did beat the world champions.

In fact, over two games, Martin O’Neill’s team took four points from the side that lifted the World Cup in Rio de Janeiro just 16 months ago. It’s safe to say that this little island has enjoyed some shocks in the world of football over the years, and it’s certainly safe to say that the exploits of those 14 green (and purple) shirted heroes on the Lansdowne Road turf last night will go down in that history.

While we’re all no strangers to reminiscing about Ireland’s exploits at major tournaments - England in ‘88, Italy in ‘94 and Germany in ‘02 are just a few that spring to mind - the Boys in Green know how to pull off a shock in qualifying as well. Last night’s result will definitely go down in the top five and here are the four that should go alongside it.

This is the match that most sprung to mind after last night’s win. It was just as unexpected, the scoreline was the same, it guaranteed Ireland at least a playoff, even Jason McAteer’s goal was scored at the same end of the ground!

On a grey Sunday afternoon in south Dublin 14 years ago Holland came to Lansdowne Road for a match that would, effectively; decide who made the play-offs for the 2002 World Cup. The Dutch were supremely confident and they had every right to be. Boasting an 11 that included the likes of Edwin van der Sar, Jaap Stam, Jimmy Floyd Hasselbaink, Marc Overmars and Ruud van Nistelrooy, Ireland should have caused no problems for the visitors. Indeed the Dutch manager at the time (a certain Louis van Gaal) proclaimed before the game that his side were so much more talented than their hosts, even the Irish would want them to qualify. Well, someone forgot to tell Jason McAteer that. After withstanding a bombardment from the increasingly frustrated Dutch attack, as well as being reduced to 10 men when Gary Kelly was given his marching orders, Steve Finnan found himself on the right wing, just short of the 70 minute mark. The full-back composed himself before delivering a ball that landed perfectly for McAteer to sweep home and put Ireland ahead. Cue scenes of delirium up and down the country. With that van Gaal made the bizarre decision to take off Overmars and order his men to punt long balls into the Irish box. Unfortunately for the Dutch boss he did not have Marouane Fellaini at his disposal and this plan B didn’t work. Ireland held out, went on to beat Iran in the playoffs and jetted off to Saipan for their first World Cup in eight years. We all know what happened next.

This was a match that had so much more to it than simply football. Ireland travelled to Belfast to take on Billy Bingham’s side on a night where Paul McGrath later said that the team feared for their lives at times. The situation was simple: a win for Ireland would see Jack Charlton’s team go to USA ‘94 while a win for the North would allow Denmark pip Ireland to second place. Bingham’s team were going to do all that they possibly could to ensure that their opponents would not be on a flight west the following June. After a tense hour of play in which neither side really shone the game eventually began to open up a little. In the 70th minute Charlton sprung Alan McLoughlin from the bench. The midfielder from Manchester didn’t know it yet but he was about to ensure himself an eternal place in the hearts of his adopted nation. Three minutes after McLoughlin made his entrance Jimmy Quinn put the hosts ahead with a goal that nearly lifted the roof off Windsor Park. But Ireland were unshaken. As the caption on RTE’s Reeling in the Years says “the Republic did not surrender”. After winning a free-kick on the right wing Denis Irwin floated a ball into the Northern Ireland box. It was half cleared but only as far as McLoughlin who unleashed a left footed volley from the edge of the box to equalise for Ireland and reduce Windsor Park to silence. Ireland held out for the point, Spain beat Denmark and Jack Charlton’s men were on their way to America.

For a number of reasons this is probably the least memorable game of all on this list. But it is no less important. Lansdowne Road was only half full with 26,000 people as most fans had given up hope of Ireland making it to Euro ‘88. Going into the match two points behind Bulgaria in Group Seven with Belgium also lurking, there wasn’t much anticipation in Irish quarters. Little did the country know that this would be the beginning the Charlton odyssey that would see his side qualify for three of the next four major tournaments. A Mick McCarthy cross shortly before the hour mark was not dealt with properly by the Bulgarian defence, the ball dropping to Paul McGrath. The Manchester United defender didn’t hesitate in burying it into the roof of the net to give Ireland the lead. Cue a nervy half an hour or so as Bulgaria went in search of an equaliser. Those nerves were thankfully put to bed six minutes short of full-time when Kevin Moran got onto the end of a Tony Galvin cross to steer home and give Ireland the win.

But still there were a number of things needed to happen for Ireland to make it to Germany. Happen they did and it is largely down to Scotland that Ray Houghton put the ball in the English net; Joxer went to Stuttgart and all the rest. The Scots’ 2-0 win over Belgium at Hampden Park eliminated one of Ireland’s nearest rivals for qualification. That meant that it all came down to the clash of Scotland and Bulgaria in Sofia a month later. The hosts needed just one point to qualify due to their superior goal difference but Scottish substitute Gary Mackay instead ensured that he would never pay for a drink in Ireland for as long as he lives as he found the net on 87 minutes to end Bulgaria’s hopes and send Jack Charlton’s team to Germany.

One name: Richard Dunne. The centre-half repelled the Russians largely on his own on a Tuesday evening in Moscow four years ago. The Dubliners efforts, and those of his team-mates, saw Ireland clinch a vital point on the road to qualification for Euro 2012.

Ireland travelled to Russia during the week of the 70th anniversary of the Siege of Leningrad. The 90 minutes that would ensue saw a Russian siege of their own as they bombarded the Irish goal with shots. But the Irish defence would not crack. Block, after block, after block kept the scoreline at 0-0. Dunne’s performance in particular was one of sheer determination and a never-say-die attitude. The most incredible moment came in the 33rd minute when Igor Semshov was all but turning away in celebration after his right-footed effort beat Shay Given. The ball was destined for the bottom corner but Dunne, somehow, managed to chase back and get his heel in the way, diverting the ball around the post.

That was only the start of it for the then Aston Villa defender, however. After a crunching tackle on Yuri Zhirkov left both players in a heap on the running track Dunne got back up, bruised, bloodied and sporting a cut to the cheek. That necessitated a change of jersey and the Dubliner’s warrior look would be complete. With no number on the back of his replacement shirt the fourth official insisted on Ireland’s goalkeeping coach, Alan Kelly, scrawling a number five in black felt tip pen. With that Dunne strode back onto the pitch looking like Ireland’s answer to Terry Butcher in 1989. Thanks to a number of superb saves from Shay Given and more heroic defending from Dunne and the rest of Trapattoni’s side Ireland managed to hold out for the point. Wins against Andorra and Armenia in the final two group games were enough to ensure Ireland a playoff tie with Estonia.

1 ‘A radical departure’: Who are CVC and what are their plans for rugby?
2 Ken Early: Why international football is fading into obscurity
3 Connell losing touch with club championship is real tragedy of Normal People
4 GUI release protocols for return to club competitions
5 Michael Jordan speaks out against George Floyd killing in rare statement
Real news has value SUBSCRIBE
Crossword Get access to over 6,000 interactive crosswords