Jay, who has Down syndrome, won Greek hearts with celebration of Samaras goal 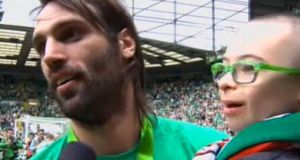 A Co Armagh boy, who received a last-minute invitation to fly out to see his footballing hero play with Greece against Costa Rica in Sunday’s World Cup clash, won’t make it to Brazil after all as his family had already arranged a holiday.

Eleven-year-old Jay Beatty from Lurgan has been an avid fan of Greek forward Georgios Samaras since the player’s days at Celtic. Last month, after the Glasgow side’s 3-1 victory over Dundee United to win the Scottish Premiership, the Greek player carried Jay in his arms around the pitch to the resounding cheers of Celtic Park.

Jay, who has Down syndrome, then won Greek hearts when his father posted a video on Facebook showing him dressed in blue and celebrating Greece’s victory over Ivory Coast, in which Samaras scored an injury-time penalty to send his country into the knockout round of the World Cup for the first time. The Armagh boy’s fame spread like a summer wildfire yesterday thanks to a Greek Facebook page (facebook.com/OJAYPAEIMUNDIAL) calling for the country’s football federation to invite Jay to Sunday’s game. Within 24 hours, the page had attracted over 80,000 likes, generated immense media interest in the story and pushed the federation into extending an invitation.

“Jay, I want to thank for you for the strength you give me. Your smile and support give strength to everyone in the national team. I hope to see you soon. I’m very, very proud that you are my friend,” Samaras said, speaking at a team press conference in Brazil yesterday.

The player announced that the Greek federation had agreed to pay for Jay and his family to travel to Brazil to watch Sunday’s game.

But when the Beatty family got the call to say they had been invited to Brazil, they were already in the airport, about to depart on a family holiday.

“Naturally we were unable to take up the offer and are so gutted, but truly grateful that people would do this for Jay. We cannot believe that this has happened and are so humbled and would like to wish Greece all the best in the World Cup,” his father Martin wrote on Facebook.

And addressing his hero by his nickname, Jay said in a video message: “Sami, I hope youse win the World Cup. And Sami, I’m sorry, I won’t be there but I still love you very much and I hope you win. Come on, Sami!”

Dimitris Athanasopoulos, one of those who set the Facebook campaign rolling in Greece, said he was amazed and humbled at the response he got.

“I’d known about Jay since Samaras carried him around Celtic Park in May after the premiership final,” he told The Irish Times. “But when I saw Jay cheering on Greece, I said to a friend that we should make his dream come true. Here was a foreign kid supporting Greece with such passion and we built on that fame.”

Mr Athanasopoulos said that he was overwhelmed with offers of financial support to get Jay on the plane to the World Cup from local soccer teams in Greece, Cyprus and Australia, which has a large Greek diaspora.

“We nearly managed to sent a kid from Ireland who we never met to Brazil. It just goes to show that when you want to achieve something, you can,” he said.