From the Archives: Jubilation as celebrating fans outshine the Italians 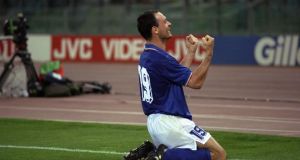 Amid disaster, triumph, and in defeat, jubilation. Italian football supporters leaving the magnificent Olympic Stadium in Rome on Saturday night gazed in deep bafflement at what was going on all around them. While they were trooping out with quiet satisfaction, the vanquished Irish fans were exultant.

It was as if the rules of the game had secretly and absurdly been turned upside down without anyone telling the Italians and it was only while they were leaving the match that the truth began gradually to draw on them: that it is possible to lose a match yet win the encounter. Their ancestors, watching Christians ecstatically face lions, learnt a similar lesson at the nearby Coliseum two millenniums ago.

Forget the result. Sitting down beside the hotel swimming pool before the match with Maurice Setters, Jack Charlton predicted what would happen on Saturday evening. Italia 90 was in financial trouble. For Italy to be knocked out at the quarter-final stage would be an economic catastrophe. It could not happen. So they could expect a classic case of home-town refereeing.

Free kicks would not be awarded near the hometown goal. Hometown defenders would fall down mysteriously and be rewarded with free kicks. Anybody who challenged a hometown player in the air would be penalised.

And so it came to pass. Kevin Moran and Mick McCarthy must have thought they had acquired dark, satanic powers, which caused anybody they approached to collapse. Even playing with their hands behind their backs they seemed able to bring about a convenient seizure. Amazing. Look, no hands.

With such a breeze, what a visiting team to the Olympic Stadium in the quarter-final of the World Cup really needs is a proven ability to create and score goals. Ireland did not have that and against the superbly skilful and athletic Italian defenders - easily the best Ireland have faced - the visitors could not expect any unconsidered trifles resulting from defenders’ errors: upon the meagre diet had Ireland’s soccer fortunes hitherto subsisted.

Such frugal sustenance was only possible with strict husbandry in defence. If Ireland permitted Italy no goals, it would come to a penalty shoot-out, and there was a terrible, cold-blooded certainty in the Irish camp that in such a duellists’ encounter, Ireland would be drinking the coffee while Italy’s gory corpse was borne from the field.

It was not to be. The single crucial error was made, and so it never came to the epees and the single, deadly thrusts. All in all, grounds for criticism from those magnificent people who have followed this Irish team, who have lifted them in adversity and rejoiced with them in triumph. And yet, as the Italian crowds dispersed into the darkness of midnight, and the Irish remained in stands, as if by remaining on the field, theirs was the victory, there was not a word of complaint. They shouted and cried and they chanted: they sang and they cheered and laughed and they waved their Tricolours as if they were banners of triumph, brandished over the vanquished. And while millions of flies were drawn to the stadium lights and to their doom, their tiny bodies descending like industrial soot, the Irish stood and cheered and cried for their hero Jack.

What they got initially was not quite the substantial lumbering presence of Jack. It was the rather smaller, more mannered visitation of Charles, whose elegantly-shoed gait was not immediately recognised. “Who’s that . . . ?” asked an Irish fan as the Taoiseach moved on the running track before the Irish crowd, waving with almost papal restraint.

But Instinct will out. He grabbed an Irish scarf and waved that, and the crowd erupted, flags frantically semaphoring that tonight held no cause for Irish shame.

And up there in the stands, those fans were exultant about what they had seen. John O’Connor, originally of Navan Road, Dublin, and now living in London, had no regrets about going to Italy for the World Cup. “I wouldn’t have missed it for anything,” he declared emphatically. “It was worth every penny. It was superb football, magnificent.”

“Brilliant ,” agreed his friend Liz Gallagher, originally from Blackrock and now also resident in London. “I don’t care about the result. That doesn’t matter.”

It was a matter of pride, of a distinctively Irish pride, said John. “Living in London, I can see that pride there means lager and tattoos and aggression. And in London I really miss the Irish sense of pride: the sense of pride that means good humour and fun and decency. My English friends asked me: ‘Why are you going to pay £400 to see a game you’re going to lose?’ Because I’m Irish, that’s why, and I’ m proud to be, and that’s why too.”

Rory Burgess from Walkinstown said the same. “I’ve never seen anything like it. It makes you proud, what we’ve seen tonight. No complaint. “

Rory Burgess and his friend Sean Hagan, a wholesaler on the Sunshine Industrial Estate, left on the stands one of the biggest of the many monstrous banners which have been a feature of the Irish support. It was 360-square metre in size, weighed 100lb and cost £500 to make. On his return, Sean plans to make a tee-shirt emblazoned with the legend: Well Done. Thanks for the Fun. Jack’ s Army. Number One.

A group from Waterford, Bob Tweedy, Tony Murphy and Ralph Boncedeleon (Ireland’ s only Peruvian supporter), shared the exhilaration of defeat, even though they faced a drive through the night immediately after leaving the stadium.

Chance in a lifetime

And naturally exuberant after the match was Stephen Kennedy of Kilkenny, whose vigil beside the Irish team has been sleepless. No complaint, no regrets, no criticism, just a breathless delight at the quality of the football we had all seen. Meeting people like Stephen has made this assignment an honour for any journalist.

He and John and Liz and Sean and Rory and Bob and Tony and Ralph, and all those thousands of others, and those decent, ceaselessly tenacious and honest men who have worn the green of Ireland with such dignity, have in the past month met triumph and disaster: they have greeted both imposters just the same – with gaiety and with laughter and with bottomless reserves of courage.

When others by their deeds make us ashamed to be Irish, as in due and evil course they certainly will, we might reach into our memory store and remember those glorious days one June when to be Irish was very heaven.