‘Board of the Association acted at all times in the best interests of Irish football, and in full compliance with Irish company law’ 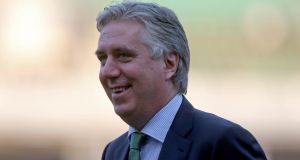 The FAI released a statement on Friday night outlining the full timeline of events surrounding Fifa’s payment of €5 million to the association in January 2010.

The statement comes after a meeting of the FAI Board on Friday and comes in light of Fifa’s statement on Thursday confirming the transaction.

Friday’s FAI statement begins: “This action is being taken because Fifa has confirmed the transaction. As such, it is the view of the FAI Board who met today, that they are no longer obliged to abide by the confidentiality agreement with Fifa.

“This is also being done to demonstrate that the Board of the Association acted at all times in the best interests of Irish football, and in full compliance with Irish company law.”

“The purpose of tonight is to give full disclosure on all the documents that are relevant in relation to this €5 million loan,” Delaney told RTÉ soccer reporter Tony O’Donoghue.

Delaney said the FAI’s main issue was not with the Thierry Henry handball that led to France winning the World Cup play-off, but the fact that Fifa went back on their idea of seeding the play-offs for the 2010 World Cup.

Delaney said: “From our point of view, we felt that the changing of the World Cup draw for the play-offs, in other words it wasn’t to be seeded, and (Sepp) Blatter in September of that year of 2009 announced that it would be seeded.

“We felt that that changed the rules of the World Cup (qualifiers), almost at the end of the tournament, before we got our play-off, therefore we got France.”

Delaney went on to claim that Blatter’s comments following the play-off caused “reputational damage” to the FAI.

The chief executive also clarified the reason why the €5 million was not obvious in the association’s accounts.

“It’s in our accounts, it wasn’t disclosed as a singular item because of the confidentiality agreement laid bare in the agreement on Fifa,” said Delaney. There’s a fine in there to the FAI of a quarter of a million dollars if we spoke about it or disclosed the fact that we had got this money from Fifa.”

The statement released by the FAI outlines 13 specific parts of the timeline, while there are also five attached pdf documents including the agreement made between Fifa and the FAI, as well as FAI bank statements.

*On November 19 2009, following the World Cup play-offs of that year, the Football Association of Ireland sent letters to Fifa and the French Football Federation to request that the match be replayed.

* On November 20 2009, following a negative reply from Fifa, the Association responded in writing to say that it was considering referring the matter to the Court of Arbitration for Sport, and asked them to reconsider their position. A letter was also sent to the French Football Federation asking them to support the position of both Captains, that the game should be replayed.

* On November 27 2009, the Association met with Fifa to raise the hurt caused to the Irish people by what had happened, the damage done to football in Ireland and world-wide and the changes the FAI felt should be made to prevent similar occurrences happening in the future.

The FAI left the issue of legal action on the table as Fifa provided no suggestion of a football solution other than Ireland could not go the World Cup.

It was agreed by both parties that the meeting would remain confidential between the relevant parties. The FAI Board was provided with a full account of said meeting on December 1, 2009.

* On November 30 2009, during a press conference, Sepp Blatter made a joke of the Association’s request to be the 33rd team at the World Cup. This was in direct breach of agreed confidentiality and subsequently brought reputational damage to the FAI.

* On January 12 2010, the Football Association of Ireland attended a second meeting at the request of Fifa in Zurich. This meeting was attended by the same FAI delegation that had attended previously, and by the same Fifa delegation.

* At this meeting Sepp Blatter personally apologised to the FAI delegation for the remarks made about Ireland seeking to be the 33rd team at the World Cup.

* After negotiation, Fifa offered the FAI a €5m interest free loan by way of compensation as well as a $400,000 Goal Project grant that was used for FAI Regional Football Centres.

* On January 15 2010, an agreement drawn up by Fifa was executed by the Football Association of Ireland and Fifa.

* At all times the FAI Board were kept informed of the various meetings with Fifa and the agreements entered into.

* The €5m loan was accounted for in the 2010 audited financial statements, under Bank and other Loans.

* The FAI sought a €5m write-down from Fifa on numerous occasions in the period following the agreement.

* In 2011, the loan was reduced to €4m. This transaction was reflected in our turnover figure of €45m in that year’s audited accounts. The balance of the loan remained disclosed within Bank and other Loans. In 2013, the remaining €4m was reduced to nil as a result of non-qualification for the World Cup South Africa in 2010 and the World Cup Brazil in 2014. This was subsequently confirmed in writing by Fifa on June 13, 2014. This transaction was accounted for in the FAI’s 2013 audited accounts.

All of the information above is contained in our audited accounts. Our auditors, Deloitte, have confirmed that they reviewed these particular Fifa transactions as part of their formal audit procedures, and the audit report confirmed the accuracy of the annual accounts. The Association is a company limited by guarantee, registered in Ireland, and prepares accounts in full compliance with Irish company law and Irish GAAP.