Euro 2016 reflection: A triumph for the French team and country 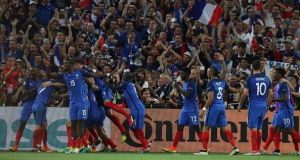 French players and supporters celebrate after their semi-final win over Germany. Photograph: Getty

In the past 18 months, it has been hard to avoid the avalanche of bad news coming out of France, from Charlie Hebdo to the Bataclan.

People wondered about the wisdom of staging these European championships at all. Last March, Uefa executive committee vice-chairman, Giancarlo Abete, said he could not rule out the possibility of playing the tournament, or at least some key matches, behind closed doors. In pre-tournament interviews, for many of us a key question to the player or the coach was: “Are You Worried About The Threat of Islamic Fundamentalist Violence”?

The tournament has been a celebratory outpouring both of fan feelgood and of long repressed French feelgood. The festive scenes in town squares all from Marseille to Paris were perhaps something more than the usual football fever.

French fans have been celebrating long into the night, often forming ad hoc processions through the town centre, singing the French national anthem.

It is not just that the Marseillaise is the dream football (or rugby) fan anthem (which it clearly is), it is also that dented French pride deserves to have something to sing about.

For me, “La France”, both football team and country, has been the gigantic winner of this tournament. Every time I hear the Marseillaise, it sounds like a victory over the forces of darkness and evil. For that, I am grateful to Euro 2016.