Didier Deschamps: From pocket battleship to commander of French fleet

From his time at Juventus, the man from Bayonne was learning his trade hard

France manager Didier Deschamps insists he has 'no tension' ahead of the final of Euro 2106 where his side will face Portugal. Video: Reuters 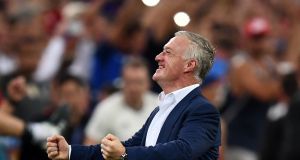 Your correspondent first met French national team coach Didier Deschamps 18 years ago on a grim, grey and cold Turin morning. I was doing an interview for the US sports channel ESPN which was preparing a series of programmes for that summer’s World Cup in France

The interview took place in the old Stadio Comunale in Turin where Juventus used to train. Deschamps arrived late and immediately apologised. As he sat down in front of the TV camera, his mobile phone rang. Without even bothering to answer it, he simply picked it up and turned it off (Roy Keane would certainly approve), saying:

I remember thinking then that, with a guy like this captaining the team, France are going to be a serious problem for everybody this summer at France ’98. We might lack a decent striker (France did indeed lack one) but we will do well, he pronounced. Business was indeed business. Deschamps’s whole manner was such that you could only conclude that this guy will have a successful post-playing career. In an interview with L’Equipe this week, German central defender Jurgen Kohler, who played alongside Deschamps for the 1994-1995 season at Juventus, confirmed that impression.

“I knew Didier as a player at Juventus but what struck me about him at that time was that he was already thinking like a coach. He used to spend hours talking tactics with coach Marcello Lippi. I am not at all surprised at the way his career has gone . . . ”

Ironically, in his latter days at Juventus, the by then World Cup winner temporarily fell out with Lippi. One February morning in 1999, he turned up at the same Stadio Comunale in a total fury, storming into the dressing-room and making for Lippi.

“How come I have to find out that I’ve been dropped by reading the papers? If I’m dropped, I want to hear it first from you, not from the papers”, he barked.

Lippi, the man whose intelligent stewardship had put Juventus back on top of European football with three Italian titles and three Champions League finals (one won) in the previous four years replied to the effect that he was the coach, adding that he would take certain decisions as, when and how he saw fit. There then ensued a bitter exchange which reportedly required the intervention of other players to restore calm.

Deschamps, you see, is a man who comes from Bayonne in the French Basque country. He is highly professional and precise but, if necessary, he can be a “don’t-mess-with-me” feisty fellow. In time, of course, he mended his fences with Lippi and Juventus, returning to coach the club in 2006-2007 through the relative nightmare of a season in Serie B, in the wake of the ‘Calciopoli’ match-fixing scandal.

This week L’Equipe suggested that it was only normal that with Deschamps in charge (since 2012), this French national team should re-find winning ways. It is no co-incidence that the man who captained the 1998 World Cup and Euro 2000 winning teams of the “golden era”, has got the show on the road again, the paper argued.

Suspensions and injuries in tournament football always mean that, in the end, a coach’s room for manoeuvre is limited. Yet, Deschamps, without the benefit of qualifiers, had clearly done a good job before the tournament in identifying Griezmann, Payet, Pogba, Matuidi, Sagna, Evra and Lloris as key elements in his side.

Against Germany on Thursday night, too, he took a chance in defence, fielding Barcelona-bound Lyon defender Samuel Umtiti who had made his international debut just days before in the quarter-final win against Iceland. Other coaches might have been tempted to recall the more experienced Adil Rami, suspended for the game against Iceland. Deschamps’s faith in the 22-year-old, however, was rewarded with an excellent performance which went a long way to confounding those of us who had expressed doubts about this French defence prior to the Germany tie.

Watching an ebullient Deschamps at his post-match press conference on Thursday night, it was obvious that he now really fancies his chances against Portugal on Sunday. Asked if this had been the biggest win of his career, against the team which defeated his France in Brazil, the cool Deschamps replied only that this was “un très beau moment”. One suspects that he feels the best has yet to come.

1 Ken Early: Project Big Picture endangers cushy position of ‘bottom 14’
2 Stockdale and Ringrose on board with expansive Irish game plan
3 The Offload: Spectre of doping hangs heavy over South African rugby
4 Bennett girding his loins for impossibly unpredictable Vuelta
5 GAA expected to go ahead with championship under Level 5
Real news has value SUBSCRIBE
Crossword Get access to over 6,000 interactive crosswords